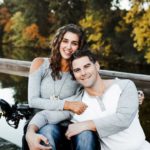 Tasha Schuh is used to getting embarrassing questions about her sex life.

Schuh, paralyzed from the chest down since she fell through a stage trap door in 1997 during a rehearsal for her high school musical, said she understands why people are curious.

“You know, I live in a very small town,” said Schuh, 36, of Ellsworth, Wis. “People would stop me at the grocery store and were, like, ‘Um, how’s that going to work?’”

Schuh isn’t afraid to overshare when she answers.

In fact, she’s written a book, “My Next Move Forward,” in which she tackles everything from online dating to dating in a wheelchair to intimacy and sex.

“I know that this is what people want to know,” she said. “I felt like I needed to be an open book on this and answer those questions so that stereotypes and myths could be dispelled.”

The book will be published by Wise Ink in December; it follows “My Last Step Backward,” which was published in 2012.

Schuh was a junior in high school when she was cast in the chorus of “The Wizard of Oz.” During a rehearsal at the Sheldon Theater in Red Wing, she was asked to move during a scene change. She took a step backward, fell 16 feet and landed on her head on a concrete floor, breaking her neck, crushing her spinal cord and fracturing her skull.

Doctors told her she would never walk — or sing — again.

Schuh, who was crowned Miss Wheelchair USA in 2012, has spent the past 20 years proving them wrong. In addition to being a published author, Schuh is a professional singer and motivational speaker.

“My passion is spreading my message and what I’ve learned,” Schuh said. “I look at how much I’ve overcome and how much I’ve accomplished. Every year has had so much meaning to me, and every year my life gets better, and I just love sharing that.”

Schuh talks to thousands of people each year at churches, schools and businesses around the country. She gave 55 speeches last year — to audiences ranging from a few dozen people to more than 1,000. Her husband, Doug Michaels, serves as her manager; the couple has been married for four years.

They met in 2012 through Christian Mingle, a dating website; Michaels was working as a meteorologist for WQOW-TV in Eau Claire, Wis., at the time.

“When Doug and I were dating, I had so many questions,” Schuh said. “We didn’t live together before we got married. We waited until our wedding night to be intimate. It turned out (sex) was completely the opposite of what I had feared. A lot of things that I had fears about, I laugh about now and think ‘Oh, my gosh, I can’t believe I was so scared about that.’ Now it’s such a beautiful thing.”

One stanza includes these lines: “Even when it hurts to breathe / Focus on the good and see / How beautiful, this life can be.”

One of Schuh’s darkest times came three years ago, when her best friend’s 14-year-old son killed himself. Schuh founded the “PITCrew” movement to help, she said.

“I knew I had to do something,” she said. “Most people who are contemplating a suicide feel alone, and they feel that nobody is there — and so the pit crew, like in NASCAR, is a team of people who help the driver win the race.”

Schuh’s fall nearly severed her spinal cord. She can’t move any of her fingers, but has limited movement in her arms and wrists.

When her doctors at the Mayo Clinic in Rochester learned she could move her wrists, they were ecstatic.

Schuh includes that story in her speeches. “I speak about the little things in life and about attitude and about how this is such a huge movement,” she says, moving her wrists in a circular motion. “This allows me to do everything that I do today.”

She can drive, move her wheelchair, feed herself, put on makeup, use a computer and sign copies of her books.

“Everyone goes through difficult times,” she said. “We all have them. It’s how we look at them and how we go through them that makes it easier or harder.

“I’m so thankful that I’ve been able to accomplish this much and stay healthy and continue to inspire others — even after 20 years.”