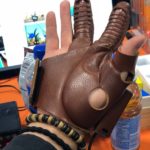 The glove helps people with a spinal cord injury perform everyday tasks like holding a cup or brushing their teeth.

A spinal cord injury can have a lasting effect on the quality of the life you’re able to lead. Depending on the severity of damage, symptoms can include pain, numbness or even paralysis, rendering everyday tasks nearly impossible. But a new robotic glove called the NeoMano hopes to help people who suffer from spinal cord injuries regain use of their hand.

Neofect, a Korean company known for rehabilitation tools such as the Rapael Smart Board and the Rapael Smart Glove, showed off a prototype of the NeoMano here at CES. It’s made of leather and looks a bit like an archery glove that covers just the thumb, index and middle finger.

It has titanium wires that can move those three fingers to perform tasks such as picking up a glass, holding a toothbrush or gripping a door knob. The NeoMano has a controller with two settings: grip, which steadily curls your fingers around an object, and release, which extends the fingers back to a resting position.

After the popularity of the Rapael Smart Glove, Neofect received interest from people with hand paralysis. Since the Smart Glove was built for stroke patients, the company decided to create an entirely new glove specifically for people with spinal cord injuries.

The NeoMano will seek funding through a Kickstarter campaign in the spring and is expected to be available later this year.