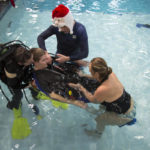 Deep beneath the surface of a crystal blue pool or a dark green ocean, differences tend to fade. As a former physical therapist at Craig Hospital of Englewood and longtime scuba diver, Scott Taylor knows this better than most.

“Water is the great equalizer,” he frequently says.

He and his wife, Lynn, own and operate A-1 Scuba and Travel Aquatics Center in Littleton, a business Lynn’s father opened more than 58 years ago.

Because of water’s equalizing nature and Taylor’s unique perspective, he began coordinating an inclusive scuba diving experience with Craig Hospital, which specializes in spinal cord injury and traumatic brain injury rehabilitation. Though he no longer works at Craig, the partnership has continued.

Once a month, patients from Craig visit A-1 Scuba. On that day, their level of mobility is inconsequential.

“We don’t get people (from Craig) in the pool … with the intent to certify. We get them here to just understand there’s another thing they can do,” Taylor said.

“There’s a facility in this community with the attitude of ‘Let’s do this.’ And I love that. I hate the word no. I think we need to say yes,” he added. “This gives us the chance to say yes to those folks.”

Chat with Taylor for a bit, and he is bound to share a story or two about the program’s power. With decades of experience comes anecdote after anecdote — people with cerebral palsy or a traumatic brain injury or who have been paralyzed after an accident, all of whom now feel a sense of normalcy in the water.

More than anything, though, Taylor hopes scuba diving will change an attitude.

“Family members come, friends come. They watch,” he said. “And they suddenly see this person that they love and care about, whose life was turned upside down, doing something really cool.

On the second to last Friday in 2017, three Craig patients gathered in the classroom at A-1 to sign waivers and learn about what to expect in the hours to come.

A buzz of excitement and nervous energy lingered in the air.

Some, like Allen Bodine of Broomfield, had been divers before their injury and were enthusiastic to return to the water. Others, like 23-year-old Dylan Martz of South Dakota, had never been scuba diving before.

A quadriplegic, Martz has been at Craig for three months and can only move his head.

“I was kind of scared to be honest,” he said of the moment before he dipped into the swimming pool. “ … I didn’t know what to think. … Just that fear of letting go.”

But after being lowered in, zipped into a wetsuit and guided through the water, Martz felt something he hasn’t in awhile — independence.

“(It was the) first time I’ve felt weightless and semi in-control in a long time,” he said.

For A-1 volunteer Todd Lindhorn, this newfound sense of ability is what the Craig scuba experience is all about.

“For many, this is the first time they haven’t felt pain,” he said, noting how amazing it can be to watch someone who is generally confined to a wheelchair move through the water with ease.

“(My wife and I) figured out you can cry in the water,” Lindhorn said.

To train as an instructor for adaptive scuba, Lindhorn had to go through an intensive program. He spent time in a wheelchair and was tasked with diving and swimming while his hands and feet were tied. Though challenging, the experience stressed the importance of trust.

Nothing spoke to the intention of the program more than the moment Bodine emerged from the depths of an indoor pool.

“Pretty close to fabulous,” he said, grinning, when Taylor asked how it felt to dive again.

Despite this, navigating an old art with a new body can be frustrating.

As an “incomplete” paraplegic, he has some feeling and mobility in his limbs and can feel the weight of his body.

Kim Hutchinson, a diver and Craig Hospital physical therapist, cannot stress the benefit of the scuba diving experience and other forms of adaptive recreation enough.

“For some people, this is an activity they’ve done before, and it’s nice to know they can do it again,” she said. “For other people, it’s a totally new experience to have once you’re in a wheelchair. How cool is that?”

Bodine agreed, emphasizing his appreciation for Craig Hospital and saying he encourages all to participate in the partnership.

At Craig, patients are surrounded by others with similar experiences, which can affect a person’s sense of motivation and can demonstrate what is possible.

“ … We can’t change what brought you here, but we can teach you how to live a fabulous life,” Hutchinson said.

New discovery gives hope that nerves could be repaired after spinal...