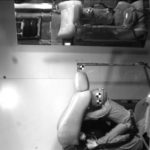 We’re not protecting young car passengers as well as we could, according to researchers at Sydney’s Prince of Wales Medical Research Institute.

They’ve shown that the spine of a young child is significantly different from that of an adult in ways which could influence the risk of spinal cord injury and the results of crash testing. And they’ve called for new crash dummy designs that better mimic what happens to a real child in a crash.

“Our studies have found huge differences in flexibility and stiffness between young and mature spines. And in a collision, a younger, more flexible, spine is likely to place greater strain on the spinal cord inside,” says Elizabeth (Liz) Clarke, a researcher at the Institute.

Car crashes are the most common cause of spinal cord injuries in Australia. Such injuries can lead to permanent paralysis. Fortunately only about two percent of these injuries are in young children. The wide use of child restraints is probably reducing the risk.

Young children, however, may be more susceptible to spinal cord damage than these statistics would lead us to believe, says Liz. “We’ve found that the young spine is softer and about three times more flexible than that of an adult. Because the young spine allows more overall movement, the spinal cord inside may be stretched to a higher degree. So, it is possible that a much smaller impact would be required to cause spinal cord damage in a poorly or unprotected child than an adult.

“Also, while it is extremely rare in adults for the spinal cord to be damaged without fracturing the Vertebrae, it is not uncommon in spinal cord injuries in young children, possibly due to this increased flexibility.”

Liz and her colleagues believe that the higher risk for younger children is hidden as they are less likely to be exposed to dangerous driving, and are better protected in the car by using child restraints. Other work at the Institute has shown the importance of an appropriate, approved child restraint in providing maximum protection to children. However, with better testing it may be possible to identify and/or design restraints which further reduce the risk of paralysing injuries, particularly in children too big for current child restraint designs.

The researchers have also discovered that flexibility along the length of a young spine varies markedly from flexibility along the adult spine. The young spine is very flexible in all directions and at all levels—the neck, and upper and lower back—whereas the adult spine is far less flexible in the middle of the back, and when twisting to the left or right.

“We hope that our results will be used to improve crash test dummy design and eventually lead to a new generation of dummies. Better child crash test dummies will give us the tools we need to make travelling in cars safer for children of all ages.”

Elizabeth Clarke is one of 16 early-career scientists chosen for Fresh Science, a national program sponsored by the Federal and Victorian governments.

Town sets the wheels in motion