Half of spinal cord injury patients may still have some connectivity, Australian study finds 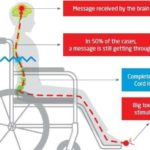 The sensation James Stanley misses most is the squidgey feeling of wet sand between his toes. Sometimes it’s dangling his legs into cool water, and the feeling of soft grass under his feet.

“They’re very simple things, but when you haven’t felt them for seven years I just think it would be amazing to feel them again,” the 25-year-old said.

A rare surfing injury called surfer’s myelopathy paralysed Mr Stanley from the navel down when he was 19 years old. As he pushed up on his surfboard his spine hyper-extended, triggering a swelling and spinal cord blockage at his T10 vertebra.

He was diagnosed with complete spinal cord injury. All connection between his lower body and his brain had been permanently severed.

“It was very traumatic for me and my family … That first year I was an emotional mess,” Mr Stanley said. “I was just becoming an adult and learning about the world and suddenly I had to find myself again,” said the keen surfer and karate black belt.

“Imagine being told seven years ago that there was no hope, no signals, nothing to work with,” he said.

But on Tuesday, Mr Stanley learnt there was something there. A faint signal. His spinal cord was capable of sending messages from his lower body to his brain.

Roughly half of people classified as having complete spinal cord injuries may still have surviving sensory nerve connections sending messages to the brain, an Australian study suggests.

The blinded study used functional MRI (fMRI) to monitor the brain activity of 23 people with complete spinal cord injury and 21 people with no injury or spinal pain as the researchers brushed their big toes.

They found the somatosensory brain regions “lit up” in 48 per cent of the spinal cord injury patients when their toes were touched, the researchers reported in the journal Human Brain Mapping.

“We originally thought communication to the brain had been completely severed in these patients – like cutting a piece of paper or a boom gate that’s closed for ever, but that’s not the case,” said Dr Sylvia Gustin, senior neuroscientist and psychologist at Neuroscience Research Australia and co-author of the research paper with Dr Paul Wrigley and Professor Philip Siddall at the University of Sydney.

“There are surviving pathways and messages are still being received by the brain, she said.

Mr Stanley was among that 48 per cent of study participants whose fMRI scan lit up.

“It’s an amazing feeling, hearing that,” he said. “If doctors can identify people like me, then who knows, hopefully they can find treatments and rehabilitation techniques to help open up those connections.”

Dr Gustin said patients did not “feel” the touch to their big toes, but the fMRI scans showed “a significant signal” in the primary and secondary somatosensory cortices (the thalamus and cerebellum),

“You can actually see a brain activation in the area which represents the brushing the toe.”

The findings were “incredibly exciting”, Dr Gustin said, because they gave hope to people categorised as having complete spinal cord injury that “something is still there”.

“It is unbelievably important for these people to now have the possibility that they might feel again where now they can’t.”More than 1200 Australians aged 15 and older sustained a traumatic spinal cord injury between 2008 and 2013, according to the Australian Institute of Health and Welfare’s Spinal Cord Injury Register.

Professor of rehabilitation studies at the University of Sydney, Ashley Craig, said the study confirmed the current binary classification of spinal cord injuries as either complete or incomplete was flawed.

The study authors recommended including a “discomplete” category to describe these patients.

“The results should be put up it lights,” she said.