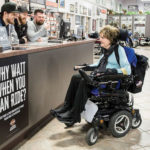 Robinette Tilley is the boss. The fact that she rides a wheelchair now instead of a motorcycle hasn’t changed that.

Tilley was in her customary spot, sitting behind her husband, Don, on his Harley-Davidson when the motorcycle crashed on Aug. 29, 2014 near Mile Post 394 on the Blue Ridge Parkway in Buncombe County. Don, 78, was killed in the wreck.

Those doctors didn’t know Tilley, or the determination of her family.

Tilley, now 76, was driven to get back to running Tilley Harley-Davidson, the Statesville business she started with her husband in 1972.

Starting from the bottom

After the crash, Tilley was taken to Mission Hospital in Asheville. Surgeons used metal hardware to piece together her shattered arms and pelvis. While at Mission, Tilley could not speak, drink or eat traditionally. She used a tracheotomy tube inserted into her throat to breathe.

Tilley eventually moved across the street to St. Joseph’s Hospital and then to the facility the Tilley family has called its saving grace: the Shepherd Center in Atlanta.

The Shepherd Center is a nonprofit hospital that specializes in rehabilitating patients with spinal cord and brain injuries, or, as Tilley’s daughter Denise Tilley LeVan calls it, “the Disney World of wheelchairs.”

Shepherd Center, which typically shies away from working with young children and older adults, turned down Tilley for treatment twice. The third time, the hospital finally said yes.

“They got her up, got her dressed and put her in a wheelchair,” LeVan says. “We all had to train to take care of her.” 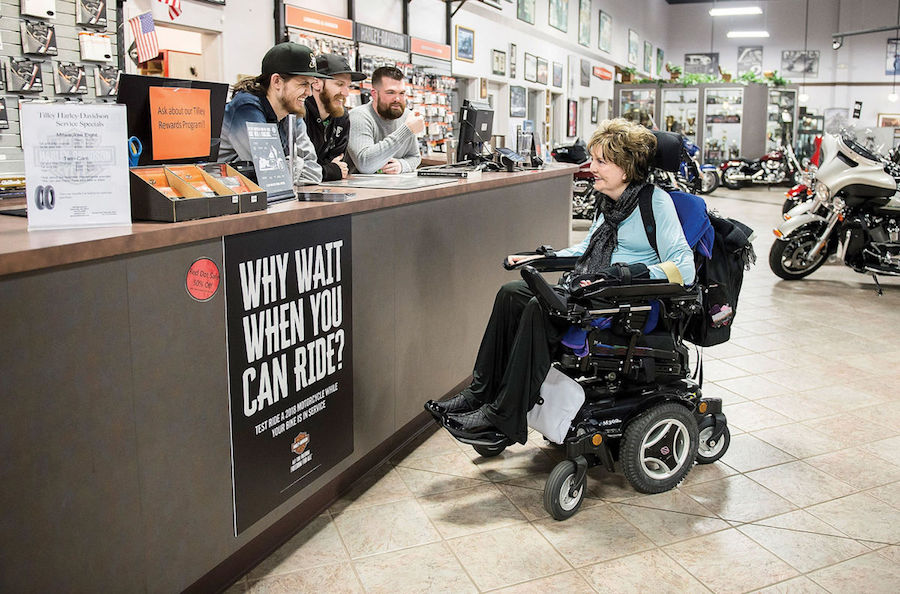 The Shepherd Center trained LeVan, her sister Donna and brother Derek on how to take care of Tilley a week at a time. The instruction included how to maintain Tilley’s tracheotomy, dress her, check her for pressure wounds and deal with spikes in her blood pressure.

Without the training, Tilley’s family believes she would not have made it home.

At Shepherd Center, Tilley’s vocal cords were injected with collagen, which helped her speak again. She also regained the ability to drink and eat.

“I was certainly glad when I was able to actually drink,” Tilley says.

Tilley left the Shepherd Center in January 2015. She was transferred to a skilled nursing facility in Taylorsville, where she developed the flu and double pneumonia. She was then sent to the ICU at Frye Regional Medical Center in Hickory and finally a specialty center in Winston-Salem.

Tilley’s life was much different when she finally got home. Before the accident, she visited the business every day and took a Zumba fitness class twice a week. Tilley’s daughters believe their mother’s healthy lifestyle before the crash helped her in her recovery.

Now, Tilley lives in the den of her home, where a ramp and widened doorways allow her to move around in her wheelchair.

Mentally preparing for living life without the ability to walk was a challenge, Tilley says.

“I felt like I could do anything I wanted to, so I had to wait through that,” she says. “But I felt like I would get better each day.”

And that’s the way things have worked out.

“Mom’s spirit has stayed up the whole time, pretty much,” Donna Tilley says. “Now she goes into the Harley shop three or four days a week and gets her hair done, and we have her on Wednesdays with the (great-grand) babies.”

Tilley is cared for by a nurse three days a week, and attends occupational and physical therapy weekly. Donna Tilley takes care of her mother on Wednesdays, Levan takes care of her on Fridays, Derek Tilley stays at the house with her every night, and the three rotate weekends.

Life now is a “different normal, but it’s normal for us,” Donna Tilley says.

Tilley no longer needs a tracheotomy, her pressure wounds are nearly gone and the blood pressure issues she had when she first came home have subsided.

Future updates to Tilley’s wheelchair will help her work on regaining the use of her arms.

“We just tried to make the best decisions for mom that we could,” Donna Tilley says. “We were just so focused on her, and then the grieving does come a little later for Daddy.”

Losing their father and almost losing their mother was the family’s “worst nightmare,” LeVan says.

“We lost our daddy and then they’re sitting there telling us, ‘You’ll never take her home,’” she adds. “We just were kind of in shock and we all kind of looked at each other and said, ‘Yeah, we will.’ It was a lot.”

The support of the community has helped the family stay positive and move forward.

“I never thought we’d have 6,000 people at my dad’s funeral,” Donna Tilley says. “It was just unbelievable.”

Former NASCAR President Mike Helton reached out to the family and organized a fundraising motorcycle ride called “Ride for Robinette.” The event raised $11,000, which the Tilley family has used to help pay for hospital bills and other needs.

“Everybody in the community has just rallied,” Donna Tilley says. “People still come in at the shop and say, ‘How’s your mom? Tell her we are still praying for her.’”

As for getting back on a motorcycle after the accident, the Tilley siblings say they have no fear.

“My daddy always said you can’t be afraid to live,” LeVan says.

As for Robinette Tilley, the accident changed her, but not her role as boss of the family business.

“She still goes in and makes decisions,” Donna Tilley says. “She has to talk to every department. She’s still the boss and that’s just it in a nutshell. And she’ll be the boss for as long as she’s here.”

You’ve got to hand it to them