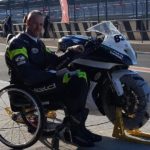 THE word determination is used a lot in sport – and for Andy Houghton it’s one of many words that could be used to best describe him and his sporting career.

Many people grow up dreaming of achieving success in sport and for Houghton it was no different.

Riding motorbikes has always been a huge passion of his and the determination and ambition that he has shown is one of the reasons why he has got where he is now.

People live and breathe sports and more often than not, there are always setbacks, whether it be major or minor.

In 2005, Houghton suffered his setback. While riding, he was involved in a motocross accident and as a result, he sustained a severe spinal cord injury.

Despite the life-changing injury, Houghton was determined it wasn’t going to stop him doing something he has always dreamed of doing.

He said: “Bikes have always been my passion, so it was inevitable that I would make a return to the track at some point.

“My initial return to motorcycle competition came through sidecar motocross.

I raced sidecars for a few seasons before discovering road racing through a charity called The Bike Experience.”

Success followed in the BMCRC (also known as Bemsee) Powerbike class and Houghton is heading into his second year of road racing.

Last year, he finished third in the Thunderbike Extreme Rookie Championship and has recently upgraded his bike to a Kawasaki ZX10R in order to race in the Bemsee Premier Division. 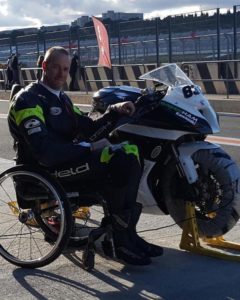 Houghton said: “Being able to complete on the same race track as able-bodied racers is fantastic.

“The only concession that I have to make is that I must line up on the final grid slot, regardless of my qualifying position, as I need to have my launch/catch crew on the grid with me.”

Houghton is thrilled at how he was able to cope with the demands of racing again.

He said: “The fact that I started every race from the back of the grid makes last year’s third place feel like an even greater achievement, particularly when I finished in the top 10 against experienced racers in the main class at times.”

Houghton has found it difficult to earn support through sponsorship, but Kawasaki in Greenham have agreed to provide some backing as he is a local racer.

He said: “As you might understand, a disabled wheelchair user racing a motorbike attracts a great deal of attention, so I believe my racing effort to be a great opportunity for potential sponsors.”

Houghton currently races for Talan Racing, which was set up by another disabled racer, Talan Skeels-Piggins.

He added: “As a disabled race team, we need to travel with quite a few crew members to help us out so this adds another level of complexity to supporting a season’s racing.”

As well as his hunger for motorsports, Houghton is a member of the GB Paralympic rowing team.

Speaking about his achievements in rowing, he said: “I competed at the World Championships in Florida last year and placed fourth out of 17 nations.”

Houghton has set aims in the sport and is targetting to make the rowing team for the Paralympic games in Tokyo 2020.