Surfer girl finds out how fragile life really is 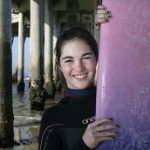 HUNTINGTON BEACH She doesn’t remember the man’s name or much more about him. Just that he approached her and asked for donations as she worked at Becker Surfboards.

And how that changed everything.

On that summer day in 2007, Devyn Bisson was the kind of 15-year-old that we want all 15-year-olds to be – bright, athletic, enthusiastic, a bundle of bounce. She was intrigued by what this man was saying.

He was talking about Life Rolls On, a foundation that supports young people with spinal cord injuries. He handed her a brochure. He told her about an upcoming event where paraplegics would be guided into the ocean on surfboards so they could sense the joy of riding a wave. That image struck her – having surfing taken away by a devastating injury, then mustering the courage to go back into the water.

The man walked out of the store that day without knowing that his impassioned pitch had started a strangely coincidental series of events. Within weeks, Devyn’s life would be in danger. Her priorities would be forever altered. And, a new overwhelming project would take over her teenage existence.

Devyn went home from work determined to do something to help Life Rolls On. She found their Web site, and read about the event the man had described. She watched inspiring videos called “They Will Surf Again.”

She filled out an online application to volunteer at the next Life Rolls On event, listing her experience as a Junior Lifeguard, as a water polo player and as a longtime surfer as the reasons she would be qualified to help someone with a spinal cord injury into the water.
Devyn hit send. By the time the application came back, Devyn would not be the same person.

Thursday, Aug. 9, was a “surf day” for the Junior Lifeguards, a break from their rescue training and the physical conditioning.

The group of young rescuers and instructors picked a surf spot near the picnic tables on the beach at San Clemente. Devyn, her twin sister Paige and two friends went into the water. Devyn remembers that she was having a great surfing day. She had got her “toes on the nose” (standing on the very front tip of the surfboard) for the first time in her life.

“It was the perfect day for fun waves,” Paige said.

After 2:30 p.m., the wind started picking up. The waves crashed a little harder. Four girls began surfing closer together.

With the bus set to leave at 3:30 p.m., they all decided they would take one more wave. The best surfer among them, Devyn caught the next one. She rode it toward shore, jumped off and waited for her group.

The other three caught the next one. As they reached Devyn, they all fell into the water. It was the end of a fun day.

Suddenly, the next wave threw one of their surfboards into the air. The board came down and clipped Devyn on the right side of her neck.

What the girls didn’t know was that the blow had cut into her spinal cord between her C-3 and C-4 Vertebrae. Devyn’s legs and back sizzled with intense pain.

Kylie Cucinotti, a Junior Guard and Devyn’s longtime friend, recognized that Devyn was in trouble. She grabbed Devyn, who screamed, “DON’T TOUCH ME.”

Kylie slipped her arms under Devyn’s and reached up to secure her neck. The maneuver, called the “C-Spine Hold,” had been taught to the Junior Guards just 24 hours earlier.

Kylie swam Devyn to the shore, maintaining a grip on her neck.

The C-Spine Hold may have saved Devyn from paralysis. Doctors found blood in her spinal column, but the tear wasn’t severe enough to require surgery. She left Mission Hospital a few days later with a neck brace, which she was told she would have to wear for more than six weeks. (It turned out to be three months).

On her way out, a nurse told her, “You are so blessed.”

Devyn said: “I realize how fragile it all is.”

It was hard to sleep, hard to move around, hard to get anything started. Her recovery was a strange time for Devyn. This vibrant teenager would have to deal with Depression and lethargy. Her grades suffered. After a few days at home, Devyn signed on to her computer. She found an e-mail from Life Rolls On.

The e-mail, dated Aug. 9 – the day of her injury, said “Congratulations.” She had been accepted to participate in the next “They Will Surf Again” event.

Of course, she couldn’t go.

But that didn’t stop her from making an impact. The contact from Life Rolls On was the jump start she needed.

“She’s had so much emotional growth after this accident,” said Toby Goode, Devyn’s mother. “For some reason, this accident has been a blessing.”

Devyn came up with the idea to host a surf contest to raise money for Life Rolls On and other spinal injury groups. She and a couple of friends went to Huntington Beach city hall to ask permission. What they found was frustration.

Next she tried to start a club to raise awareness about spinal cord injuries on campus at Huntington Beach High. She was told she had applied too late.

She contacted Seth Rosenzweig, the program director for Life Rolls On.

She finally got permission to start a club, which meets at her Huntington Beach home. They’re talking about hosting a fund-raising dinner, donating a wheelchair to a person with a spinal cord injury and resurrecting the surf contest idea.

“We will do it,” Devyn said confidently. “Are you doubting me? I started the club in my garage, and everyone said I would never have a club.”

“I doubted her,” Paige said. “I thought she was crazy. But now we’ve come over so many obstacles.”

Whatever Devyn accomplishes will not surprise her Junior Lifeguard Instructor Kristina Eich.

“She has the most amazing determination,” Eich said. “She’s so inspiring.”

In March, she volunteered in her first “They Will Surf Again” event, where people reminded her how close she was to being one of the participants instead of one of the volunteers.

And, on April 26, she went surfing again – even though her doctor said it was too soon.

Her mother, stepfather, father and aunt were standing on the beach. Her friends Nicole and Larry Beltramo (Nicole’s father) dashed out into the waves.

Devyn was nervous. She kept falling as she tried to stand on her surfboard. She didn’t catch a wave for almost 30 minutes.

Then she caught one.

“My footing felt really weird, but my first wave was awesome,” Devyn said.

On the beach, her family was cheering.

Disabled vets get hot wheels despite their wheelchairs