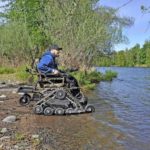 Casey Moore’s withered right hand pushes the small joystick that thrusts a special wheelchair down a TouVelle State Park trail, with the chair’s tracks carrying him over rocks and thick grass.

“It feels like I’m driving a mini tank,” Moore laughs.

He powers down a short embankment to experience something he hasn’t since a diving accident 18 years ago left him paralyzed from the chest down, with limited use of his arms and hands.

Moore eases the chair into the Rogue River, whose water lapping against the chair is the closest he can come to enjoying the playground of his youth.

Moore is the latest of more than a dozen people with spinal-cord injuries who are able to reconnect to the outdoors thanks to David’s Chair, the legacy of a Medford man who refused to allow a debilitating disease keep him from enjoying the outdoors.

The group is named after its founder David Hartrick, lifelong and passionate hunter and angler who worked as a care provider in Medford when he was diagnosed with ALS in January 2017.

The disease known as Lou Gerhig’s Disease swept through him quickly and within a few months left him bound to a conventional wheelchair whose limitations created a wall between Hartrick and the woods and waters he loved.

“He knew it was coming and it progressed really fast,” says Steve Furst, a Medford police officer who was friends with Hartrick at Eagle Point High School in the late 1980s.

Furst and other friends learned about the Action Track Chair, whose tractor-like tracks and joystick controls allow its driver to maneuver over snow, sand, slick grass, water and all sorts of other terrains regular chairs can’t handle.

At about $20,000, the chairs are less expensive than some conventional chairs covered by medical insurance, but the Action Track Chair is not covered, Furst says.

So Furst and others started spitballing ways to raise money for Hartrick, and after a failed rummage sale, the groups realized they needed to think bigger and beyond Hartrick.

They formed David’s Chair as a nonprofit to raise money not just for Hartrick but so others with spinal-cord injuries or disabling illnesses could enjoy the outdoors for free.

“He wanted others to use the chair, not just him,” says Furst, the non-profit’s chief executive officer.

They raised $27,000 at an auction/poker tournament last June, enough to buy David’s chair as well as a kid-sized chair. The chairs are loaned out, creating the opportunity for many to use them.

Hartrick received his chair in July, allowing him to reconnect to places like sandy beaches near Brookings, the Rogue River’s Natural Bridge near Union Creek and the forests near Bend.

But Hartrick’s ALS was advancing rapidly and by fall he was too weak to use it, Furst says.

“A lot of people don’t have the means to get this chair,” Furst says. “Some do but it’s sitting in their garage for nine months. What we’re doing is getting this chair to as many people who want to use it as possible, for free.”

Since then, the chairs have ferried more than a dozen people over sand, snow and trails, in most cases reconnecting them to the outdoors they lost due to traumatic injuries, Furst says.

“It’s brought a lot of joy and happiness to a lot of people,” Furst says. “It’s changed my outlook on life. Who knows? One of us might need that chair to get outside some day.”

Moore, who became paralyzed from the chest down when he dove into a golf course pond after a lost ball 20 years ago, discovered David’s Chair through a social-media post last fall.

Moore helps mentor new spinal-cord injured people at local hospitals and has seen versions of the outdoor-traction chairs, daydreaming about what felt like the unattainable.

“It’s like looking at Ferraris on line and hoping you could get one,” Moore says.

He borrowed the chair from Hartrick last December, taking it with his wife Michelle and their 2-year-old son Thomas to the Union Creek area.

Moore powered the chair through the soft snow along the Rogue Gorge Trail as Thomas played in the snow the way 2-year-olds do.

“It was very liberating,” Moore says. “It was awesome to be able to share that with him instead of sitting in the parking lot watching my wife share it with him.”

Since then he’s joined the David’s Chair board of directors and accompanied Furst and others in subsequent beach trips with more disabled people, making sure he gets to spend some sand time with his son.

While helping create new memories for the Moores, the chair gave Jan McCurdy her elk camp back.

The McCurdys, of Roseburg, hunted Rocky Mountain elk in Eastern Oregon for more than three decades until a 2015 motor-vehicle accident left Jan McCurdy paralyzed just below her arms.

She borrowed the chair last fall to join her family on the hunt, and was actually able to hunt a bit near camp herself.

“It got me back to elk camp and that was just the best.” says McCurdy, 59. “It made all the difference in the world.

“After trying David’s Chair, I knew, man, I wanted one,” McCurdy says. “So I went out and bought one.”

Since then, the able-bodied world began to take notice. The organization recently won Fundraiser of the Year by the Oregon Festivals and Events Association and is putting the finishing touches on another round of fundraisers set for May 18-19 in Medford.

Furst says he would like the group to buy a trailer to lend out with the chair, pay volunteer travel expenses and eventually get chairs stationed in Bend, Medford and along the Oregon Coast, because beach trips are very popular.

Moore says he intends to return to the beach this year and take the chair on hiking trails throughout Southern Oregon.

“There’s a lot of adventures I can think of,” Moore says.

Buzzing around Medford, he regularly notices the Table Rocks, the Rogue Valley’s signature mesas looking over him.

I’ve always stared at them from a distance,” Moore says. “It would be really awesome to crest one of them.”