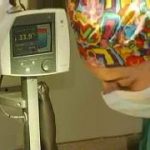 According to the Spinal Cord Injury Information Network, there are about 11,000 new cases of spinal cord injuries each year in the United States. As of June 2006, there were about 253,000 people living with a spinal cord injury.

When a spinal cord injury occurs, there is the primary insult — the impact — which neither doctors nor patients can do anything about. But there are also secondary injuries — the damage that happens in the minutes, hours, days and weeks after the primary injury.

Dalton Dietrich III, Ph.D., from the Miami Project to Cure Paralysis, said, “You have these Secondary Injury mechanisms that lead to progression of damage and that’s where we are working in the laboratory to develop new strategies, new drugs, new therapies to target that secondary injury.”

A new treatment for spinal cord injuries is under study at the Miami Project to Cure Paralysis.

Doctors are running icy cold saline through the bodies of newly injured patients to lower their body temperature to about 92 degrees for two days immediately after their injury.

In animal studies, Dr. Dietrich said, “We found that if you lowered temperature of the spinal cord after injury, we could actually improve Motor function. The rats walked better. Also, if you looked at the pathology of the spinal cord, there was preserved tissue.”

It was promising enough to try in humans. The first human patient was “cooled” in January 2006. Several more patients have received the treatment since in an experimental study.

Dr. Dietrich said, “So far it looks like it’s safe. We’ve gotten some good results. It appears to limit secondary injuries that can lead to progression. [Spinal cooling] does a lot of good things. Cooling a patient a couple degrees seems to work very, very well.”

Dr. Dietrich says the earlier the treatment is started after the initial injury, it’s likely the results will be better. He attributes the impact of Hypothermia to its ability to affect multiple injury mechanisms, rather than targeting just one as drugs so often do.

“You actually need a combination therapy … to actually stop cells from dying and that’s what hypothermia does. It targets multiple injury mechanisms and leads to long term protection. It protects those axons running up and down the spinal cord, which is extremely important in having the brain talk to your muscles and vice versa,” Dr. Dietrich said.

He emphasizes that it is important to not cool the body too much. There is a very distinct temperature that needs to be reached for the procedure to be safe and effective. Cooling the body too much can cause side effects like cardiac arrhythmias and infection.

Dietrich says, “If you can limit those secondary injuries, you can turn a complete injury possibly into an Incomplete Injury and there you have the best chance with that Rehabilitation strategy to now regain significant walking function, sensory function and other consequences associated with spinal cord injuries.”

The technique is still under study in Miami.

Copyright 2008 by TheDenverChannel.com. All rights reserved.