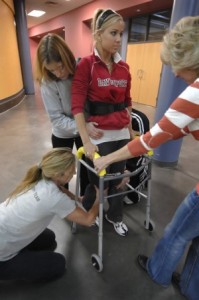 When Kadi DeHaan took her first steps in December, two years after a car accident forced her into a wheelchair, she did it in typical Kadi style: low-key, nonchalant and with a confident grin.

Apparently, she knew all along she would walk away from her pink and black wheelchair and her customized leg braces, despite a spinal cord injury at chest level and a grim prognosis that she would never walk again.
Press Photo/Katy BatdorffTherapists help guide Kadi DeHaan’s legs and feet as she walks through the hallway at MVP gym in Rockford. The movements must be “ingrained neurologically” before they will become automatic, said therapist Sandy Burns.

It happened after two years of intensive therapy and six trips to Russia, where her stem cells were harvested and then injected into her spinal cord to restore nerves.

She chucked the bulky leg braces and, with only the aid of a walker and therapists to guide her feet, she began putting one foot in front of the other three months ago.

Kadi’s progress is “very much a unique and wonderful thing,” said Physical Therapist Sandy Burns, director of the Center for Spinal Cord Injury Recovery in Rockford, a clinic affiliated with the Detroit Medical Center.

No one can say for sure if nearly two years of experimental treatments or hours upon hours of Physical Therapy — a trio of three-hour sessions every week — led Kadi to where she is today.

Probably both, said Burns, whose clients sometimes head to Russia or Portugal or China for treatments that aren’t approved in the U.S. and generally aren’t covered by insurance.

The physical therapy is a very important component, “but it’s definitely Russia,” that put Kadi back on her own two feet, Kadi’s mom, Bonnie, insisted. “There are just too many coincidences. Kadi knows that what she’s got she got from Russia.”

After fundraising dollars ran out more than a year ago, Kadi’s parents took out a loan to pay for the trips to Russia. The three-year protocol recommended by Moscow doctors will cost in excess of $150,000.

“We told Kadi that she’ll have to get a really good job and she can support us,” joked her mom, who is a freelance photographer and part-time house-cleaner. Kadi’s dad, Randy, is a truck driver. The family, which also includes 18-year-old Allie, lives in Gaines Township.

In October 2004, Kadi lost control of her car on rain-slicked 84th Street in front of Byron Center High School. Her Pontiac struck an oncoming van and Kadi, who was not wearing a seat belt, was ejected. Within a minute, the car burst into flames.

She returned to school four months later and graduated with her Byron Center classmates in 2006. Days later she headed to Russia for her first stem cell treatment.

At the time, Kadi had just a bit of feeling in her feet and could walk only with lots of help from custom-built leg braces and a walker.

Since then, she’s given up the braces and is “tons stronger” and “a lot more independent,” she said. She’s a full-time student at Davenport University who quaffs Mountain Dew and confesses to sending text messages during class.

“Kadi’s very social. Sometimes that can work against somebody if they want to be totally committed to this. I’m sure there are days when she’s burned out,” said Burns. “But I can see she’s in it for the long haul. I attribute that to her family as well.”

Kadi’s mom, dad or sister accompany her to every therapy session.

Her mom remembers the early days when she had to style Kadi’s hair because Kadi couldn’t lift her arms high enough to do herself. Now, Kadi has the strength and dexterity to do that and so much more, such as move herself from her wheelchair to her bed.

She’s so convinced of the gains made at the NeuroVita Clinic that she’s planning her seventh trip there in August. Quite a change of attitude after she declared the first trip “the worst three weeks of my life.”

The NeuroVita clinic was founded by neurologist Andrey S. Bryukhovetskiy in 2002. It’s located on the campus of the Russian State Medical University and can accommodate 35 patients.

The clinic dabbled in embryonic stem cell treatments but now uses only autologous material — that which is obtained from the patient — because there are no problems with compatibility, not to mention politics and religion, according to the Web site.

Kadi and her mom met with Bryukhovetskiy, who speaks only Russian, during their last visit in February. An employee who doubles as translator told them Bryukhovetskiy predicted that not only will Kadi walk unassisted some day, she’ll run.

“It was exciting to hear him say it,” Kadi recalled.

About 11 of every 100 patients with spinal cord injuries walk again after the stem cell treatments, Bryukhovetskiy told them.

Burns, who is quick to say her clinic does not endorse any of the alternative treatments, acknowledged that the stem cell injections do seem to make a difference, at least for Kadi.

“Folks that have gone there have, I think, consistently reported that they are noticing changes. They are feeling more,” Burns said.

She tempers her optimism with the reality of what she sees every day: some of her clients will never accomplish half as much as Kadi has. Progress often depends upon the severity of the spinal injury, not just the region of the spine that was damaged.

That’s why Burns doesn’t make predictions about what her clients will eventually accomplish. But of course, she hopes Kadi continues to make great strides.
“You have to have hope. If you don’t have hope you truly don’t have anything,” Burns said.