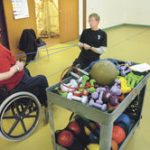 WHEELING — Spending most of your life in a wheelchair might mean sitting idle for some folks. But not for George Adese.

Adese, 45, of Wheeling has been a Paraplegic for 24 years after sustaining a spinal cord injury. He joined the Chambers YMCA in Elm Grove a year ago and started his wellness program by participating in the “Silver Sneakers” class there geared to senior citizens and those with limited mobility.

“But a lot of the exercises they do include the legs,” he said. “I wasn’t able to do a lot of these, and I found myself feeling out of place much of the time with nothing to do.”

Developing upper body strength is especially important to someone who must lift themselves in and out of a wheelchair many times each day.

Adese became aware of the U.S. Surgeon General’s Office push to promote gyms and YMCAs as places to work with the disabled and help them become stronger. Otherwise, doctors would instead be “treating them after the fact” when they had lost much of their natural strength or sustained additional injuries.

Adese then approached Mick Gregorcic, operations director at the YMCA, and fitness director Bill Bach about developing an exercise program for paraplegics — one that would stress upper body development as well as weight loss.

Bach noted it wasn’t easy finding information for such exercise training, but that a search on the Internet pointed him in the right direction.

“These people have the same upper body as anyone else,” he said. “In fact, people in wheelchairs experience more shoulder problems than anyone else.”

Now exercise classes for persons with lower body disabilities are being offered at the YMCA in Elm Grove, where trainers work with those in wheelchairs to help them develop arm, neck and back strength.

Bach said the key to this training is to work with the paraplegic by increasing weight and resistance “a little at a time” to help them improve their strength, and he focuses on having them work the opposing muscles from those they do when lifting themselves in and out of their chairs.

Dumbells and weight-resistance bands are utilized, though not always in the typical way.

“Sometimes we have to improvise,” Bach said. “But it works all right. We’re working the right muscle groups.”

When Bach works with Adese, he will hold out a resistance band while Adese tries to pull it away from him. At the same time, Bach blocks Adese’s wheelchair with his own weight so it doesn’t move.

Exercise equipment to improve the cardio-vascular conditioning of paraplegics does exist, according to Bach. These machines differ from traditional exercise equipment in that wheelchairs can be rolled up to them for use.

At present, the YMCA doesn’t have any of this equipment, said Gregorcic. If more people were to take part in the classes, the center could apply for grants to obtain the machines, he added.

This week, just Adese and one other person — Sandy Rusnack, 50, of Wheeling — participated in the exercise class for those in wheelchairs.

Adese said after just six weeks of the classes, he does feel his health has improved and that he has lost weight.

Rusnack said she was left a paraplegic 34 years ago following a car accident.

“I’ve done different things to exercise, but I’ve never been involved in a group program,” she said. “It’s just like it is for anyone else. If you’re not part of an exercise group, often you don’t participate.

“I have dumbbells at home, but I always find a reason not to use them. If Bill’s here, you find you have to do it.”

Rusnack added there is an added social benefit to the exercise of participating with others who share your experiences. For a paraplegic, the action of simply leaving the house to exercise can be a morale booster.

After just one week of the exercise, she said she finds she is not nearly as tired as she goes through the day.

“If anything, people who are disabled need to work out more,” she said.