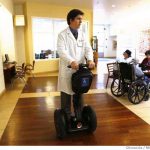 My patient was bleeding profusely from the esophagus, and as a first-year gastroenterology fellow, I had been called in to the UCSF intensive care unit to stop it. We were successful. The next morning, Jan. 4, 2003, I went out for a bike ride – but never made it home.

In a freak accident, I was thrown headfirst over my handlebars and paralyzed from the shoulders down. At San Francisco General, my pulse and blood pressure crashed. The trauma team, my own colleagues, administered life-saving dopamine and rushed me to the ICU. I spent five days there, barely able to breathe, staring at my motionless limbs, powerless to will them to move.

Astoundingly, within days, I began regaining slight movements, first in my left leg, then my right. I was transferred to Santa Clara Valley Medical Center, an elite spinal-cord injury treatment center, where I underwent intensive rehab. There, my recovery continued, and I slowly exceeded the expectations of my therapists. My progress kept optimism alive, as my left arm started to move, and then my recalcitrant right.

Our tiny Potrero Hill condo filled up with helpful gadgets, including a mouth-stick for typing, a neat chair that doubled as a commode and shower bench, and a massage table where I could be stretched to avoid contractures. I continued to rehabilitate, working out three hours per day, six days per week.

I learned to stand, and subsequently to walk. Plastic leg braces were ordered, as well as a platform walker. The walker was eventually replaced by forearm crutches. To everyone – except for my wife, Amy, and me – it was miraculous.

Unfortunately, nine months after my injury, despite continued workouts, the recovery decelerated. My right leg dragged behind me, catching on cracks in the sidewalk and tripping me. After just five minutes, I needed to sit, too weak to continue. This “walking” was OK around the house, but was not going to get me far on the outside. I had no ability to maneuver around the medical center, in a shopping mall, or even down the street. I discovered that “walking” wasn’t really walking.

We reluctantly ordered a motorized wheelchair. Despite the faux-carbon fiber frame, leatherette backrest, and gel-cushioned seat, the chair remained a powerful symbol of illness and Disability. I was ashamed, but had no choice, especially if I was going to return to work.

Unable to examine patients or perform procedures, I could not continue as a gastroenterologist. I had to start over, retraining in a specialty that could accommodate my disability. I chose radiology at Stanford Medical Center. With a specially modified van to transport my wheelchair, and a team of volunteers to assist me, I was moving forward.

Amy and I were energetic people and desperately wanted to be active again. Even in the disabled-friendly Bay Area, there were barriers. A road too rough or a curb too steep would quickly shut us down. Four years after my injury, we attempted a Tuscan vacation.

Without transportation for the motorized wheelchair, we left it behind. I brought crutches, leg braces and a small manual wheelchair. The first day, the reality of our situation hit us. Cobblestone streets, inclines, and lack of access conspired to confine, sadden and frustrate us.

One night at home we happened upon a show on the Travel Channel called “Accessible Adventures.” It showcased disabled travelers, some of whom globe-trotted on Segways, two-wheeled, electronic personal transportation vehicles. The travelers cruised happily and effortlessly over cobblestones in Italy and dirt roads in Thailand. One of the vacationers had a spinal-cord injury similar to mine.

I knew little about these curious machines, but was excited at the possibilities.

Amy and I drove to the Pacifica Segway dealership. The salesmen floated around the showroom, balancing steadily on two wheels. With assistance from the salesperson and my wife, I cautiously mounted one. It rocked erratically back and forth, but after a few seconds, both the machine and I settled down. Amy also got on one, and we went for a test drive. My legs quickly tired, but it was exhilarating – this was the closest to walking I had been in 4 1/2 years. 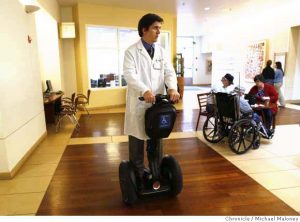 We bought one on the spot and shelved the wheelchair. The Segway became an Extension of me. Physical and psychological benefits were quickly apparent. Spending more time upright, my balance and strength improved, even off the Segway. Rushing across campus with the wind in my face, I was running. Standing tall on the Segway, nobody could even tell I had a handicap.

However, something insidious was also occurring: unfriendly looks, laughing and mocking. It wasn’t long before the first time I was asked to get off the Segway. A cafeteria security guard walked up to me and said, “You can’t use that in here.” I had to explain my handicap, and he apologized.

The next day, a woman shouted at me: “You need to get off that RIGHT NOW! You can’t have that in here. I already called security.” She walked away, but I angrily chased after her. A shouting match ensued. I yelled, “Do you say the same thing to people in wheelchairs? Excuse me, sir, but I’m afraid you might run over my feet. Could you please get up and walk?”

After cooling down, but still in a bad mood, I reflected on the confrontation and grudgingly began to consider putting a handicapped sticker on the front of my Segway. Not wanting to advertise my disability, I procrastinated. However, the harassment only intensified. People yelled at me from their cars: “Use your legs!” “Hey, Segway dork – why don’t you walk?”

One weekend we went shopping. A mall security guard quickly zeroed in on us and asked me to leave. I explained my situation, and he radioed his supervisor. Amy and I continued shopping but apparently had become fugitives. Two security guards followed us, feverishly talking on their radios: “They are heading north toward Crate & Barrel!” A plainclothes supervisor intercepted us and said: “Do you have a note from a doctor?”

I then forcefully tugged my right hand off the handle bar and induced a rapid spasm that made the guard’s face cringe. He radioed back to base, “I don’t think this guy is faking it.” Then he apologized to me and said, “Perhaps I could offer you free parking.”

I could no longer stand the constant confrontations, and reluctantly taped a bright blue handicapped logo squarely on the front of my Segway. I thought that people would see the logo and understand that I was not just some lazy rich guy. But I was wrong.

Sept. 1, 2007. Cal versus Tennessee at Memorial Stadium. Just as I was approaching the gate, something hit me square in the back, and my Segway surged forward. I pulled back hard to brake and the Segway luckily kept its balance. I turned around to see a group of fratty guys walking away, laughing and high-fiving. Incredulous and somewhat frightened, I sped after them, yelling, “Why did you push me in the back?”

“I wanted to see if it could, like, really balance,” one replied. I told him that I could have been seriously hurt if I had fallen. “Sorry, dude.”

Fortunately, since then I have experienced somewhat fewer insults and attacks. I have adjusted to the looks to a certain extent, although they still bother Amy. People are curious, and the Segway has also become a conversation piece in a way the wheelchair never could.

Sometimes, people come up to me just to say that the Segway is cool. Others are curious about how it works. I hope that more people, able-bodied and disabled, adopt and accept the Segway as an alternative mobility device. Until then, I have a simple plea: Please don’t push me off my Segway.

Dr. Peter D. Poullos is a resident physician in the radiology department at Stanford University.

Function the key to fashion