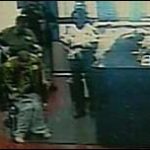 Four US sheriff’s deputies have been suspended after deliberately dumping a quadriplegic man out of his wheelchair to search him, officials have said. and IBrian Sterner was tipped onto the floor of the Florida police station after being arrested over a driving offence.

Unable to walk since a 1994 accident, he has only partial use of his arms and no feeling below the sternum.

The incident in January was caught on a CCTV camera in the jail in Hillsborough County, which incorporates Tampa.

Charlette Marshall-Jones, the deputy who actually forced the man from the chair, has been suspended without pay.

Mr Sterner, who is able to drive, had been arrested at his home by officers acting on a driving violation warrant.

Mr Sterner said that when he arrived in the booking office the officers told him to stand up, but he was unable to do so.

According to an interview he gave to the Tampa Tribune newspaper, Mr Sterner said that Dep Jones “was irked that I wasn’t complying to what she was telling me to do”.

“It didn’t register with her that she was asking me to do something I can’t do.”

The surveillance video, released by the sheriff’s office, shows Dep Jones walk behind Mr Sterner’s chair and tip it forwards until he falls to the hard floor below.

Unable to brace his fall, Mr Sterner lands heavily and rolls onto his back, at which point Dep Jones starts searching his pockets.

A fellow officer joins her, helping to roll Mr Sterner over and search his back pockets.

The pair then attempt to get Mr Sterner back into his chair, but finding that they are unable to do so they call over to other deputies who help them lift him into place.

“The actions are indefensible at every level,” Chief Deputy Jose Docobo said of the incident. “Based on what I saw, anything short of dismissal would be inappropriate.”
http://www.youtube.com/verify_age?next_url=http%3A//www.youtube.com/watch%3Fv%3DUAGb7_g4Aso