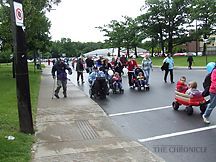 After an early-morning downpour, it looked as though the 300 participants in Sunday’s 4th annual Rick Hansen Wheels in Motion race might have to paddle through the streets of Pointe Claire, but the sun came out just before they crossed the starting line to raise $20,000 for spinal cord research and a new adapted playground set for the city.

Organizing committee chairman Doug Webb, who has been raising money for the playground since 2004, said he hopes to see improved accessibility and adapted transportation for people whose mobility is impaired.

“Someday we’re hoping to find a cure for spinal cord injury, but in the meantime, the people that have disabilities that are left in wheelchairs want to improve their quality of life,” he said.

Webb broke his neck in a car accident when he was 23 years old and has been using a wheelchair ever since. The Pointe Claire resident said that although technological advances have made it easier for him to get around since his accident 24 years ago, parts of the West Island are still difficult for him to navigate. “It’s very bumpy. The roads are horrible to roll on,” he told The Chronicle.

“Every time they put a new building in, they do it to code with electric doors and all that, but in the Pointe Claire village, it’s older buildings, stairs, and there’s no real way to make that adapted. So what we just have to hope is that all the new stuff that’s built is built with accessibility in mind.”

That includes the new playground, which will feature height-appropriate sandboxes, adjustable basketball nets, and a poured-rubber surface. According to Pointe Claire mayor Bill McMurchie, the project has been endorsed by city council and is currently in the planning stages. “In the fall of 2007, we will began looking at the financial situation and begin adapting, if possible, a schedule for the construction of this park,” McMurchie said.

“We love the Pointe Claire community,” Dallaire said after thanking Webb. “This money will be used to get people sailing who cannot come sailing because they are in an area where they cannot use adapted transportation.”

Webb also presented a certificate of appreciation to Wheels in Motion fundraiser Cheryl Miller. “I’m very appreciative and I’m going to be here every year that I can be,” she said.

Peter Treacy, founder of the Eastern Townships Disabled Skiers Foundation, attended the event and had his adapted skis on display outside the Malcolm Knox Aquatic Centre. He explained how a Disability doesn’t have to hinder people from partaking in outdoor activities.

“What we’re trying to do is take ‘can’t’ out of their vocabulary,” he said. “Everybody tells people with a disability, ‘you can’t do this, you can’t do that.’ We think you can, it just needs to be adapted, and with the proper instruction.”

It took Treacy, who lost a limb in 1980, five years “before I found out it was possible for a person with a disability to ski.” He started the ETDSF in 1995, offering instruction to five skiers in Mansonville. Today, that number has grown to over 100, and includes a summer water-skiing program.

“You find out from children and adults with disabilities the patience they have and the courage they have,” Treacy said. “I always thought I knew what courage was, but I had no idea.

“We have a little boy who’s got TARS syndrome — Kevin’s his name — and I remember when we did the water ski two years ago. He just let out a hell of a cry of enthusiasm and he said, ‘Peter, that’s the best day of my life!’ When you hear things like that — oh my God, it’s a motivator.

“These three children here,” Treacy added, unearthing a brochure and motioning to the grinning, snowsuit-bundled trio on the cover, “Jonathan and Philip are 13 and Karen’s 14. They had a car accident three years ago.”

The driver of the other vehicle, who had been talking on his cellular phone, dropped his phone and bent down to pick it up. The car veered into the wrong lane. The car with the children in it swerved to the opposite side to avoid him, but at the same time the other car swerved back into the right lane. “He hit the passenger’s side, killed their mother and the three kids became Paraplegic,” said Treacy.

“I’ll never forget the first day they came up (to Mansonville).”

It had been thirteen months since the accident.

“We took them up that day on the hill, they were training, and I said to the father, ‘Jacques, would you like to go up and see the kids practicing?’ He said ‘yes,’ and I took him on the ski-doo and we got up there and he broke down and cried like a baby.”

Treacy asked him what was wrong.

“He said, “I never thought I’d see my children smile and laugh again. That’s the first time in thirteen months,” Treacy recalled. “We were all choking back. My wife was bawling.” The kids took to skiing like fish to water. “They ski intermediate hills everywhere. The two boys ski expert hills. Ski Quebec, the provincial racing team, wants the two boys. They’re that good. So it’s stories like that that drive you. We know we’re doing the right thing.”

BY WENDY SMITH – The Chronicle