After accident, Katie Mathews knows what life is about now 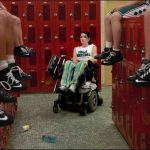 She just wants to be herself. “Normal,” she says.

But Katie Mathews, 17d, has had only fleeting glimpses of normal since the wreck in the spring of 2006.

Katie can no longer walk. She cannot dress herself or brush her hair, and needs help putting toothpaste on her toothbrush.

Every night her mother lifts her into bed. And in the morning, an aide gets her dressed, puts on her makeup and styles her hair.

Together they pick out a necklace. She wears one every day to cover the hole in her throat that once held a Tracheostomy tube.

After a remarkable recovery from the near-fatal single-vehicle crash about 18 months ago, Katie has returned to Venice High School full time for her senior year.

Her presence highlights the traits that made Katie such a popular student and talented basketball player. Her competitive fire. Her determination. Her stubbornness. And most of all, her strength.

But as her classmates taste independence in bite-sized pieces — applying to colleges, pushing their curfews and heading to parties — Katie at times depends on her mother more than her 2-year-old brother does.

Katie was paralyzed from the chest down in the crash.

It pains her to ask for help. She never wants to be a burden. She tries not to dwell on the things she once loved — playing basketball or going to parties with friends.

Instead, she tries to focus on things that are in reach. Things she can control — including her perspective on life.

It shows in the sparkle of her green eyes, her quick wit and in the eloquence and conviction of her words. Once a self-proclaimed gossip girl, Katie now does without the drama she use to thrive on.

“I know what life is about now,” she said.

Katie and her friend, Chloe West, then 16, got stuck at a traffic light and fell behind in a caravan of people headed to a party.

With Chloe behind the wheel, the girls got on Interstate 75. Katie, acting as the co-pilot, was getting directions from a friend on her Nextel phone; it squawked out that the pair should take the Jacaranda Boulevard exit. The girls saw that they were about to pass it. Traveling in the left lane at 80 mph, Chloe cut the wheel in an attempt to make the exit, causing the SUV to fishtail. Fearful it would flip, Chloe said, she turned the wheel to the left.

Chloe said she remembers the SUV going airborne and rolling three times, the seat belt digging into her side, before blacking out.

It rolled one more time before coming to rest in the median.

Revived by off-duty paramedics who witnessed the crash, she saw Katie beside her, slumped forward with her eyes closed.

“I looked over at Katie and just started freaking out,” Chloe said. “I think I also asked if she was dead.”

Both girls were airlifted to Bayfront Medical Center, with Chloe in serious condition and Katie critical.

Two of Katie’s Vertebrae were shattered and her spinal cord was punctured in several places, causing her to lose feeling below her chest.

Ten days after the crash, doctors feared that Katie had sustained serious brain damage because she was not responding to stimuli.

At her side each day, Miller watched her daughter, on a respirator, fight.

“She would look at me and I knew she was still in there,” Miller said.

The wreck had erased three years of memories. Disoriented, Katie believed nothing that anyone said. Even her mother seemed unfamiliar.

She fought with the nurses, convinced that the medicine they were giving her was making her sick.

“I thought I was in hell,” Katie said.

Initially, no one told her she was paralyzed. With spinal cord fluid traveling into her brain and severe blood clots in her legs, she constantly underwent tests and procedures.

Once Katie was alert and aware, her mother told her about the paralysis.

“She really broke down,” Miller said.

But 20 minutes later, Katie asked about the seriousness of her injuries. The crash had impaired her short-term memory.

Miller said Katie asked three times about her injury and each time, she had to repeat that she could no longer walk.

After more than five weeks in intensive care, Katie was flown to Craig Hospital in Denver, which specializes in Rehabilitation and research for people with spinal cord and traumatic brain injuries.

During the painstaking recovery, reality sank in.

Katie can no longer feel or use her legs. Her arms bend at the elbows because the nerves that control her triceps are paralyzed. She can use her hands, but not her fingers. In medical terms, Katie is an incomplete quadriplegic.

At first, she was angry.

“She literally told me she didn’t want to live,” Miller said.

And then Katie asked: “Why didn’t God take me?”

As her health improved, thoughts of giving up faded.

Once she had a 305-pound motorized chair, which cost as much as a new mid-sized sedan, Katie’s perspective changed.

Instead of feeling sorry for herself, she made friends at the hospital.

And one day, when no one was in her room, she drove herself outside to sit by a garden.

Because of the wreck, Katie is almost always tired. Once outside, she dozed off. Her family and the nurses searched for her frantically, but they all had a laugh when they finally found her, snoozing and sunburned, in her chair beside the garden.

Slowly, she concluded she had been spared. For some reason, the off-duty paramedics witnessed the wreck and were able to call for help and, for some reason, she did not sustain serious brain damage.

And in return for surviving, she pledged to do everything she could to educate young drivers about safety.

Her goal is to raise awareness about the dangers of driving distractions.

According to the National Highway Traffic Safety Administration, driver distraction is the leading factor in most crashes and near-crashes. And the most common distraction, according to a recent study, is the use of cell phones — not just dialing, but talking and listening.

The federal government reports that nearly 7,000 drivers between the ages of 16 and 20 were killed on U.S. roadways in 2006.

Katie plans to deliver a speech to students in driver’s ed classes, outlining what happened the night of the wreck and reminding them to be aware of their surroundings.

While much of Katie’s memory has returned, she has no recollection of the wreck. Her speech and understanding of that night are based on what others have told her.

She stresses that she does not want sympathy. Instead, she wants to prevent “this” from happening to anyone else.

“I want people to know that this happened mostly because of passengers like me, because I was being distractive toward my driver and that ended up with me in a wheelchair,” Katie said. “So, I take full responsibility — well, not full, but most of the responsibility — for the crash.”

But Chloe puts all of the blame on herself. When she returned to school after the wreck, she expected people to hold her responsible for the crash — and they did.

The guilt she carries flooded over her when basketball season began and she was running sprints down the court while Katie could not.

“I feel guilty about it a lot,” she said.

Katie and Chloe are still friends, although Chloe does not visit Katie’s house anymore; it is too painful for Katie’s family to see her.

“That’s kind of hard, but I’m fine with her,” Katie said. “She didn’t mean to crash that night. It wasn’t her choice. Everything happens for a reason.”

Some days, her mission is enough to keep her going. But other days, it brings anger back to the surface.

“I just get mad at God sometimes. I get mad and then I realize I’m here for other reasons; I’m living for other kids,” she said. “It’s hard.

“I just want to be normal sometimes.”

She always envisioned herself rolling up to her first day of senior year in a new car. Instead, Katie’s mother dropped her off at Venice High in their wheelchair-lift equipped minivan, which was donated after the crash.

Katie had returned to school for part of her junior year, but went only part time because of rigorous Physical Therapy and intense fatigue.

Her senior year, though, would be different.

School is often the day’s highlight, an escape. There, she is just Katie Mathews.

No one stares or treats her differently.

Well, almost no one.

Since her return, people who did not like her before the wreck are now sweet as sugar, as if trying to atone for some unspoken teenage sin.

Knowing that people view her differently, mainly because of the wheelchair, makes her self-conscious. When homecoming approached, Katie had doubts about attending.

Her outlook changed when Katie learned she was part of the Homecoming Court.

“Then I got queen, so I had to go,” Katie said with a laugh. “The school kind of suckered me into it.”

The students “crossed these barriers,” Miller said. “It was the best, most selfless act.”

Although it was hard, Miller rented a limo for Katie and her friends. “I have issues as a mom,” she said. “It’s hard to have other people drive her.”

Katie, decked out in her new blue dress, traded her motorized chair for a manual one. Her date, homecoming king Mike Atamanchuk, lifted her into the limo.

At the dance, friends took turns whirling and spinning “Queen Katie” around.

“I’m having the time of my life,” she said at the dance.

Katie’s life is a constant battle between body and mind.

Some days, negative emotions get the best of her, while on others, small triumphs keep a smile on her face.

On the good days, she looks forward to basketball and her role as an assistant coach for the Venice girls’ varsity team.

She talks about becoming independent, driving again, going to college and someday becoming a psychologist who counsels patients with spinal cord injuries.

Despite her optimism and immense support from her family, which includes her mother and stepfather in Venice and her father and brother in California, Katie has bad days when the gravity of her limitations is too much.

Her mother struggles, too.

“Your emotions hold on,” Miller said. “I still carry a lot of anger.”

Tucking Katie into bed recently, Miller had one of those moments.

“She’s my daughter. She’s nearly 18 and she should be able to do these things.”

Katie interrupted and told her to stop.

With tears in their eyes, they switched gears.

Miller, now smiling, recalled a recent evening when Katie said, “I think my toes are cold.”

Miller looked at her daughter’s swollen feet and felt her toes. Indeed, they were sticking out from under a blanket and were downright frigid.

It was the first time she had felt any sensation in her toes since the wreck.

“The little things are awesome,” she said.

ANGEL OF THE ISLES