The iPhone setting that changed this man’s life 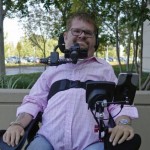 Todd Stabelfeldt is sending his wife a romantic text. He taps his chin on a button mounted on his wheelchair, then grins, pleased with his wooing.

A quadriplegic since he was 8, Stabelfeldt can’t move anything below his neck. Now a 36-year-old engineer and business owner, he’s turned his wheelchair into a powerful mobile communication hub using switches, a Bluetooth headset and an iPhone 6.

He averages a phone call every six minutes and sends more than 100 texts a day. He’s not much for social media other than LinkedIn (LNKD), but loves to check his elaborate smart-home set up, read books, listen to podcasts and look up recipes online. Frequently outside on the move, he uses the Strava app to track how many miles he racks up.

Stabelfeldt accomplishes some of this with Siri and the rest by tapping the physical buttons and a joystick mounted on his wheelchair near his head. He is able to control the entire iPhone interface, thanks to an iOS setting called Switch Control.

Also known as switch access, it’s an accessibility feature for people with physical disabilities who can’t use a touchscreen in the traditional way. It turns a complicated user interface into something that can be controlled with basic inputs.

At its simplest, Apple’s (AAPL) Switch Control works by automatically cycling through the elements on an iPhone screen. A blue outline moves on its own between the apps or menu options. When it hits the desired spot, users trigger their “switch” to select it. The same system works with a keyboard and auto-suggest to type out text.

The setting is hugely customizable to accommodate a wide variety of needs and situations. A switch might be something external like a button or breathing tube, or the entire touchscreen itself can become a simple switch and the front-facing camera can detect left or right head movements. It can be set up to work with just one switch or as many as the user wants.

A self-described geek, Stabelfeldt has 12 switches. With practice, the switches can be as speedy as any collection of shortcuts. Watching Stabelfeldt use his iPhone is a blur of apps opening and closing, texts and emails coming and going.

Independence has been hugely important to Stabelfeldt since the day his young cousin accidentally shot him with an antique rifle. At 16, the C4 quadriplegic moved out of his parents’ house, eventually getting a degree and becoming a software engineer.

Switch access on computers is not new, but it has only recently been built in to touchscreen smartphones. Apple (AAPL) added its Switch Control to iOS 7 in 2013. Google (GOOG) brought switch access to Android 5.0 in 2014.

Until a year and a half ago, Stabelfeldt mostly used computers for work. Now, his phone has become his primary work device. He uses it to run his business managing remote servers and work on a foundation that helps those with disabilities find independence through technology. (The Todd Stabelfeldt Foundation)

His favorite part of the iPhone isn’t work, but connecting with his family. After he first set up his phone, Stabelfeldt used Siri to send a quick text to his wife.

“Tell my wife, ‘I love you,'” Stabelfeldt recalled saying. “I’m a grown ass man. I want to tell my lady I love her.”