Art as an outlet: Montag, who has been a quadriplegic for 40 years, is able to paint using a special cuff 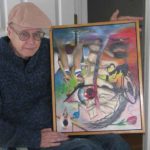 A quadriplegic for 40 years, Montag creates art in his spare time with a specially designed cuff he fastens onto his right hand.

Last week, maneuvering his wheelchair, he guided a visitor through his kitchen and attached garage into his cozy studio cluttered with paintbrushes and tubes of paint. He wheeled up to the easel, slid his hand into his cuff and began to dab bits of bright color on an unfinished painting.

“I use realism and impressionism. A professor told me never to stay with just one technique,” he said. “I love to challenge myself. Some people just do flowers, but there’s no way on God’s green earth that I’m going to do that. My artwork is my opportunity to capture moments in time. It’s about bringing beauty into people’s lives.”

Rewind to Feb. 17, 1976. Montag then was 16, living in Moline, Ill., and a member of the only high school gymnastics team in the Quad Cities. “I loved gymnastics. I loved what I could do on the ring,” he said.

As he was practicing for a district meet, he did a double-back off the rings and fell off. “I landed on the back of my head. I don’t know how it happened. You open up or let go. I broke vertebrae five and six in my neck.” He couldn’t move. He was paralyzed from the chest down.

For the next six months, he was in acute care hospitals and rehab centers. Montag always had loved to doodle and throw pottery, and while he was in rehab, a therapist took him to recreational therapy. “She taped a paintbrush on my hand with masking tape,” he said. He began to paint. He became fascinated. He loved it. “It gave me an outlet,” he said.

Two weeks after he left the hospital, he went back to school, but readjustment was difficult. Not because of his wheelchair — “I’d learned how to deal with my stigma” — but because of the way others treated him. Once a stand-out in athletics and academics, he realized people were uneasy around him. “I wanted people to see that being in a wheelchair isn’t that bad. There’s no need to ostracize people like me. Just give us opportunities,” he said.

Montag quickly found opportunities. He got a paper route. He got a job as a dispatcher. “I’m very positive, very motivated. I have energy and enthusiasm,” he said.

After high school, he studied psychology at the University of Illinois. There he met a girl named Beth. “I asked her to go out. She said no, but I kept asking her. I called her the day she’d finally agreed to go out and I said, ‘‘It’s Jeff, the little guy in the wheelchair.’”

Their relationship blossomed. A few years later, before he proposed, he gave her a book, “12 Things to Know Before Marriage to a Quadriplegic.” He explained, “I wanted her to be sure. As a quadriplegic, your maturity is exemplified. You have to be mature in order to survive and do well. I wanted to make sure she was OK with that. We talked about all kinds of things people who are getting married normally don’t talk about.”

Montag first worked in a New Orleans rehab unit for victims of spinal cord injuries. He came to Kearney 27 years ago to help start and head an outpatient rehabilitation clinic at what now is CHI Health Good Samaritan. He then became Good Sam’s director of educational services until early 2015, when the hospital turned its rehab services over to Kearney Physical Therapy.

He also helped bring the Turttle therapy pool to Good Sam’s Wellness Center, one of just 10 such pools in the country. “After that, I never stopped putting things together,” he said.

Montag was instrumental in starting the sports medicine program at what now is New West Sports Medicine and Orthopedic Surgery at 2810 W. 35th St. For the last three years, Montag has been a career consultant for Right Management, helping laid-off people find new career paths. He has a master’s degree in rehabilitation psychology.

Through it all, he kept painting. When he was stressed, his wife told him to paint. Sometimes she simply taped a paintbrush to the front door. “She’s my best critic,” he said.

His paintings hang in every room in his house, including the bathroom. Color brightens all of them, even snow-drenched landscapes.

He works from photographs he has taken, many during his extensive travels to Civil War re-enactments, pow-wows, the Grand Canyon’s North Rim and the Black Hills. He paints sights close to home, too, including Chimney Rock and the sandhill cranes. Sometimes he paints scenes he’s spotted in magazines or the Kearney Hub. “People would say, ‘You shoot photos. That’s good for you,’” he said. “But the way people think is not always how it is. There’s something more there than meets the eye.”

His paintings, done in oils or acrylics or watercolors, take several weeks to complete. Before he starts, he often does extensive research. From 2001 to 2007, he used resources at the Buffalo County Historical Society’s Trails & Rails Museum to paint five historic images from Kearney, including the old Fort Theater, the Frank House, the Midway Hotel, the old Opera House and the chapel at CHI Health Good Samaritan.

In their 34 years of marriage, Jeff has taught Beth how to do household projects he cannot do, such as putting up drywall, installing a ceiling fan and mowing the grass. “I am the eyes. She is my hands. We are incredible together,” he said.

Although few quadriplegics can have children, the couple had three, and Beth home-schooled them all. They are Ben, 33, a nuclear engineer in Wamego, Kan., Cassie, 31, a writer, and Mandy, 27, who is in nursing school. Beth teaches English as a Second Language at the University of Nebraska at Kearney. Montag loves to tell how, when his children were small, they asked him why people always stared at them. Montag knew it was his wheelchair, but he told them cheerfully, “They stare because we’re famous.”

Although Montag misses the power he felt as a gymnast — “my ability to manipulate and control my body was wonderful” — he long ago accepted his 43-year-old injury. Once in a while, his inner self still asks why, he said, but “We can all find someone who’s worse off. The person I was before went away. The person I am now lives with what he’s got.”

He added, “I truly think able-bodied people are scared to death of all this. People without disabilities love hearing stories like mine, but often, when they truly get involved with us, they begin feeling our pain. A lot of people can’t take it. They grab onto the rope and go back up to the surface.

“Even physicians struggle with disability. When they have to work with a quadriplegic for an extensive time, it upsets their comfort zone.”

When Montag retires, he hopes to paint pictures for families who have lost loved ones who served in the military. “A photograph is a picture, but a painting is an heirloom. I want to touch their lives by giving back,” he said.

How one man’s spinal cord injury is still healing 24 years...