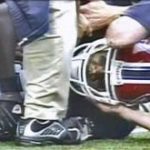 An experimental treatment – inducing Hypothermia – has been helping a professional football player make a remarkable recovery from a paralyzing injury. Cooling therapy, also being used in Triangle hospitals, has made the recovery possible.

Buffalo Bills tight end Kevin Everett sustained a severe spinal cord injury in the season opener against Denver on Sept. 9. The third and fourth Vertebrae in his neck were fractured, leaving him paralyzed.

She could be right. Five weeks after his injury, Everett has developed enough strength to briefly hold himself up on a walker. He can also use his feet to push himself around in a wheelchair.

Everett’s progress comes after weeks of difficult Rehabilitation, but doctors said it was what they did in the first few hours after his injury most likely made the difference.

While transporting Everett to the hospital, doctors used an experimental strategy: They pumped cold saline into his body, inducing mild hypothermia.

Several Triangle hospitals use the same therapy for many heart-attack patients to prevent damage to the brain.

“By taking pressure off the spinal cord, it gives the opportunity to, first, have the cord heal and, second, to prevent further injury,” Goldstein said.

The hypothermia treatment has given Everett his best shot at recovery, and more patients will likely benefit as other doctors use the experimental strategy.

Copyright 2007 by WRAL.com. All rights reserved.