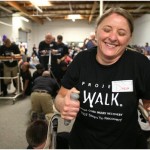 CARLSBAD — Inside an office building in a Carlsbad industrial park Saturday, dozens of people stood up from their wheelchairs and took their first steps all over again.

Some of the 30 spinal cord injury sufferers — many of whom were young men who lost feeling in their legs after a car wreck or diving accident — walked about 25 feet with the help of physical therapists and trainers.

Others, such as 26-year-old Dan Cummings of Austin, Texas, were further along in their recovery, but marked milestones by walking longer distances.

“I was told I’d never walk again, never feel anything below my shoulders — all that stuff,” said Cummings, who walked half a mile in a little more than 44 minutes Saturday.

“It was huge — probably the furthest I’d ever walked without resting” since he dove into shallow water in June 2000 and broke his back, he said.

Witnessed by hundreds of friends and family members, the “Steps to Recovery” event was hosted by Project Walk, a nonprofit organization based near McClellan-Palomar Airport that supporters say has a unique method of helping those who have been told they would never walk again beat the odds.

Inside the center Saturday afternoon, a San Diego news anchor narrated as participants strained to reach the “finish line,” while loved ones watched with widely varying emotions.

Others who are undergoing treatment at the center but are still strictly wheelchair users, watched and cheered, hoping to get their own turn in the spotlight.

“I don’t walk — not yet,” said John Pou, 38, who broke his neck diving over a wave off the coast of North Carolina in August 2005 and relocated with his family to North County last year to receive treatment at Project Walk.

“I definitely have made progress. When I first got here, I could barely balance in a wheelchair,” Pou said, motioning toward his legs and adding, “I’m working on the lower half now.”

Pou’s wife, Marci, said that she found Project Walk while researching recovery options for those who have suffered spinal cord injuries.

“I was reading an article in a magazine on alternative methods for healing” that mentioned the project, she said. “I felt like God spoke to me — this was the place.”

So the Pous moved with their two young children to Southern California — a daunting step, Marci said, when all she knew of the region came from ominous headlines on CNN — to try the alternative treatment offered at the Carlsbad center.

“We were going to give it a year and see how it went,” she said. “By November, we knew we were here to stay.”

Now, John said, he aims to be up and walking like those who were celebrating their “first steps” Saturday: “We’re going to shoot for next year.”

Jerry Hoffmeister, chairman of the board for Project Walk, said the difference between the project’s approach to healing and that of traditional Rehabilitation techniques hinges on hope: Traditional wisdom says not to get a patient’s hopes up, while Project Walk uses the emotion as a catalyst for recovery.

The message many spinal cord injury patients get at first diagnosis is something like, “Prepare yourself for a wheelchair and whatever else you need, because that’s really the best you can do,” said Hoffmeister. “Project Walk says, ‘What you can do is up to you.’

“We’re really giving people the self-esteem they need to recover and live their lives,” he added.

The project’s trainers also use unorthodox methods of rehabilitating patients, such as always working with them out of their wheelchairs and focusing on the lower body when conventional wisdom would call for a strict regimen of upper-body strengthening, said co-founder Tammy Dardzinski.

Cummings, who said he has made significant progress while in the care of Project Walk’s trainers, is in the process of helping to launch a third U.S. center in Boston. Project Walk has another center in Portland, Ore.

He said he believes in what the project can do for those who have given up hope of standing and walking.

“I definitely made more progress here than in other places,” he said, adding that the conventional treatment he received before visiting the Carlsbad center in August 2003 was less hopeful, focusing more on how to cope than on how to overcome.

“In other centers, they don’t even touch your weaknesses,” Cummings said. “But here, the sky’s the limit.”