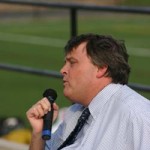 With each passing week, it appears more and more likely that Kevin Everett will make a full recovery from the spinal cord injury he suffered in the season opener on Sept. 9. Although the original prognosis of the Bills tight end predicted that he would never walk again, in recent days Everett has been able to lift his legs in bed and move his upper extremities. Such encouraging progress so soon after the gruesome collision has left doctors optimistic as to Everett’s long term prospects.

Not everyone is so lucky.

Unfortunately, St. John Fisher has seen more than its fair share of spinal cord injuries over the years. During the fifth game of the 1980 season, Siena safety Frank Bice made a tackle on Fisher’s tight end, a tackle that would forever alter the course of his life.

Like the Everett hit, which still has the power to turn stomachs after dozens of re-viewings on television, the impact of the blow seriously harmed Bice’s spinal cord. The resulting damage left Bice a quadriplegic, instantly snatching away his ability to do what you and I take for granted.

That, however, is just the prologue to Bice’s story. What would follow is a tale of trial, tribulation and, ultimately, triumph.

Bice was moved to Rochester’s Strong Memorial Hospital immediately after the injury. During his three month stay at Strong, Bice received intensive care from the dedicated staff of the hospital. Not only that, but the Fisher community embraced Bice in such a way that its concern sticks with him to this very day.

Bob Bayer, Fisher’s coach at the time, and a number of players visited Bice multiple times after the injury. Father Joseph Travato, a fixture of the Fisher community, was especially supportive, spending countless hours with Bice throughout his Rehabilitation. 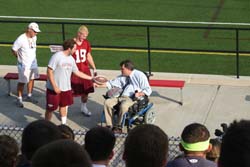 “I was a professor here at that time and I remember Mr. Bice’s incredible courage and determination,” Bain said. “It is no surprise that the people here embraced Mr. Bice and treated him as one of our own.”

Bice was eventually moved to the Rusk Institute, where he would spend the next five months continuing on the long road back. It wasn’t always easy, but you might just find a picture of Frank Bice next to the word perseverance in the dictionary. Such is the nature of the man’s indomitable will.

Fast forward 27 years, and here Bice sat before the 2007 edition of the St. John Fisher Cardinals on Sept. 25, eager to impart his story to a new generation of football players. Bice has made the journey to reconnect with the Fisher community and the staff at Strong Memorial, both of which played such a huge role in his recovery.

“This program made me feel appreciated,” Bice told more than 100 assembled players and coaches. “I was always treated like a very welcome guest, and it feels the same now as it did twenty seven years ago. I’m thrilled to be back.”

Senior captains Rob Kramer and Steven Stepnick presented Bice with Fisher T-shirts and a football signed by the entire team. Bice urged the Cardinals to make the most of the opportunity before them.

“There’s one thing you can always control, and that’s your attitude,” Bice said. “Make the most of every second, love one another and be there for each other through good and bad. You have so much to be grateful for.”

Bice’s words did not fall on deaf ears.

“What amazed myself and many of the guys on the team was his strength and the will to talk about his injury, and for him to have the ability to come back to the place where it happened,” Kramer said. “It was an honor to meet him.”

In conclusion, Bice urged the Cardinals to “go do this thing,” referring to Fisher’s national title hopes. Bice, after all, knows a thing or two about accomplishing big things. His very life is a testament to the idea that anything is possible. As the man himself is quick to point out, he has been blessed.

Bice married his high school sweetheart and coached his high school football team. He now lives on Long Island, where he is employed by Merrill Lynch as a financial advisor. In his spare time, Bice gives motivational speeches and recently became a deacon in the Catholic Church.

“I thank God for such an amazingly full life,” Bice said. “Everything I’ve ever prayed for the last twenty seven years has come true.”

The extraordinary manner in which Bice has overcome the obstacles placed before him is truly inspirational. Not only has he persevered, but the man has excelled in all that he has done.

Whenever life might get a little rough, the story of Frank Bice is there urging us forward, whispering it can be done. Perhaps the greatest compliment we can pay to Bice is the simple heeding of his remarkable example.