At the bedside of paralyzed Bills player, sheembodies can-do spirit for the long road back 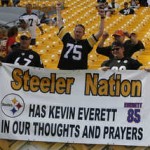 She arrived at Millard Fillmore Hospital dressed in her Sunday best, which in Buffalo during autumn means a red Bills sweat shirt and jeans. Kevin Everett’s mother has been in Western New York for a full week since he suffered a spinal cord injury that threatened his life and ended his football career.

Patricia Dugas has experienced the gamut of emotions. She was upbeat and laughing Sunday, grateful for the support her son has received since he crumpled to the turf in Ralph Wilson Stadium last weekend. His hospital walls are lined with pictures and letters of encouragement from football fans and children across the country.

During the Bills’ 26-3 loss to the Pittsburgh Steelers without their fallen teammate, Dugas was at times overcome with tears of joy as her son continued to improve and tears of sadness over how quickly their lives had changed. All along, she was optimistic about his prospects for recovery and realistic about the challenges ahead.

“It’s completely overwhelming,” Dugas said during a 25-minute interview, during which she declined to be photographed, in a basement meeting room in the hospital. “Him being my baby, I’m mostly concerned about his state of mind. I worry about him. It’s my main concern. It’s real hard. I was in shock for the first few days.

Everett has been able to wiggle his fingers and toes, fueling optimism for him and his family, but he remains a quadriplegic. His mother said he perked up last week when his teammates visited him in the intensive- care unit. From his fourthfloor room, he watched parts of the Bills’ loss to the Steelers while taking catnaps in his bed after the hospital set up a television that allows him to see the screen no matter his position.

“He’s watching — intently,” his mother said with a laugh.

Doctors still were not sure Sunday whether Everett will make a full recovery and walk out of the hospital, as suggested last week by a physician in Miami. It could take months before they draw a conclusion about his future. Dugas continued to hold out hope that the 25-year-old tight end would someday lead a normal life. 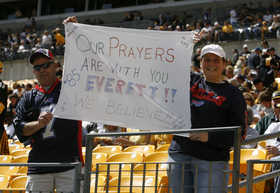 Dugas remembered watching on television 16 years ago when Detroit Lions guard Mike Utley suffered a neck injury that left him paralyzed from the shoulders down. Dugas recalled feeling a hint of concern about her son, who was 9 at the time and already smitten with football.

Utley made gradual progress over the years and now includes skiing, sky diving, kayaking and cycling among his many triumphs. He can stand with braces but mostly uses a wheelchair. Everett has been showing off to his mother by wiggling his toes and smiling as a means of saying goodbye when she leaves the room.

“It’s going to take a lot more than that to get Kevin,” Dugas said. “Kevin is grateful just to be alive. He opens his eyes every morning, and he’s grateful. This is just an obstacle he has to overcome. He knows this is a hill that he has to get over.”

Sunday, his mother was still trying to make sense of an unfathomable week.

She had invited a few friends to her home in Atascocita, Texas, a suburb of Houston, to watch the Bills’ season opener last week against the Denver Broncos. The game was not televised in the Houston area, so she began combing nearby restaurants and bars before finding a Bills fan club at Mulligan’s Restaurant and Sports Tavern.

She arrived at the restaurant with her husband and three daughters moments after the second-half kickoff and wondered about the commotion around the TV. She quickly realized her son was motionless on the turf. She was pleading with Everett from afar to show any sign that he was OK.

What began as a cheerful Sunday and the anticipation of a new season turned into the start of the worst week of her life. Dugas did not get any sleep that night and took a 6 a.m. flight from Houston to Buffalo on Monday. She arrived that afternoon and since has been with her son almost every waking hour. 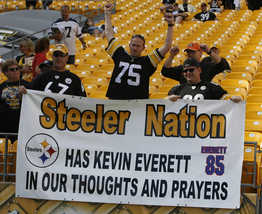 “I stayed up most of the night packing, drinking coffee and praying,” she said. “Everybody kept calling. I was mad because I couldn’t get to him. The anxiety was killing me. You feel helpless. I didn’t know what to do. I felt like my hands were just tied behind my back. It was so sad.”

Dugas has found peace in the support she received in Buffalo and beyond. Everett has received nearly 1,000 letters and cards from people nationwide.

The Bills, who are paying her expenses while she is in Buffalo, have given her about 35,000 e-mails that poured into their office in the days after the Everett was injured. His girlfriend, Wiande Moore, also has been at his side since last week.

“The Buffalo Bills organization has been wonderful,” she said. “I can’t express to those people how good they have been to me, not to mention the hospital staff. I’ve never seen anything like it, and I doubt that I ever will. Everyone has taken such good care of him. We’re grateful. It’s just a wonderful staff.

“And the fans? The fans are just the greatest. I never thought I would ever witness things like that. I tell everybody that there’s no fan like a Bills fan. These fans really love and care about these boys.”

Dugas will remain in Buffalo for the foreseeable future while her son recovers. Her daughters — Herchell Dugas, 15; Kelli Dugas, 14; and Davia Dugas, 11 — were still in the Houston area with their father. They are expected to visit their half brother at some point, depending on how he progresses.

“Every day, he’s doing a little bit better,” she said. “It’s like a miracle to me. He’s so strong mentally. He’s strong in his face. He has accepted this, but he’s not taking this as a death sentence.”