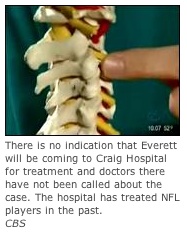 (CBS4) ENGLEWOOD, Colo. Experts in spinal cord injuries at Craig Hospital in Englewood said Monday there appears to be some signs of hope as Buffalo Bills’ player Kevin Everett is treated for a neck injury suffered during Sunday’s game against the Denver Broncos.

Doctors treating Everett in Buffalo said there are some signs of movement and sensation throughout Everett’s body.

“There’s some messages getting through that makes you feel a little bit more optimistic that the cord wasn’t hurt across its entire diameter,” said Dr. Tom Balazy, Craig Hospital’s Medical Director.

Balazy said the biggest gains in a spinal cord injury are in the 3 to 6 months following the incident. Doctors said some improvements can still be noted 18 to 24 months later.

Everett remains in the intensive care unit and under sedation. Doctors in Buffalo said he sustained a life-threatening injury when he collided with Domenik Hixon during the kick-off to start the second half. They said he is still at risk of blood clots and infection.

There is no indication that Everett will be coming to Craig Hospital for treatment and doctors there have not been called about the case. The hospital has treated NFL players in the past.

Former Detroit Lions guard Mike Utley was treated at Craig after a neck collision during a game in 1991. He now lives in Washington State and is working to raise money to cure paralysis.