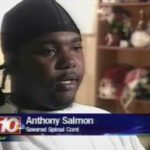 During a game in September 2003, Anthony Salmon of Wilson Magnet High School made a tackle and didn’t get up. He couldn’t get up. His spinal cord was severed.

Today he reflects on the uncertainty that Everett is facing now, which all came back when Salmon was watching Sunday’s game.

“First thought was I hope he’s alright that’s the first thing you think of when you see any player get hurt,” Salmon said. “But then when he didn’t move and they called the ambulance then you know its something more serious.”

Salmon has come a long way in the last four years, but it’s taken hard work, something Everett now has ahead of him.

“A lot of rehab, a lot of therapy, a lot of pain but he can still live a productive life,” Salmon said.

It’s heartbreaking he says to see another football player hurt this way, but he thinks there’s nothing anyone can do to prevent these injuries.

Salmon knows how crucial these next few days are and how expensive. “He’s in the NFL he has the monetary resources to get the top of the line rehab equipment if he’s gonna need it.”

Anthony Salmon now owns a home, has a long time girlfriend Ana, and a 5-year-old son, Anthony junior. His plans for the future are college and walking again. He also wants to start a foundation to benefit kids whose parents have suffered spinal cord injuries.

Reaching her goal one step at a time