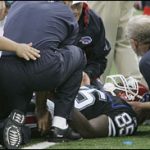 (CBS/AP) Kevin Everett sustained a “catastrophic” and life-threatening spinal-cord injury while trying to make a tackle during the Buffalo Bills’ season opener and is unlikely to walk again, the surgeon who operated on him Monday said.

“A best-case scenario is full recovery, but not likely,” orthopedic surgeon Andrew Cappuccino said. “I believe there will be some permanent neurologic deficit.”

Everett was hurt Sunday after he ducked his head while tackling the Denver Broncos’ Domenik Hixon during the second-half kickoff. Everett dropped face-first to the ground after his helmet hit Hixon high on the left shoulder and side of the helmet.

Cappuccino noted the 25-year-old reserve tight end did have touch sensation throughout his body and also showed signs of movement. But he cautioned that Everett’s injury was life-threatening because he was still susceptible to blood clots, infection and breathing failure.

Everett is in the intensive care unit of Buffalo’s Millard Fillmore Gates Hospital, where he is under sedation and breathing through a respirator as doctors wait for the swelling to lessen. Cappuccino said it will take up to three days to determine the severity of the injury and the recovery process.

The tackle forced Everett’s third vertebra to collapse over the fourth, severely damaging the portion of the spinal cord that controls the limbs and breathing, reports CBS News correspondent Jeff Glor.

In reconstructing his spine, doctors made a bone graft and inserted a plate, held in by four screws, and also inserted two small rods, held in place by another four screws.

Doctors, however, weren’t able to repair all the damage.

Bills punter Brian Moorman immediately feared the worst when Everett showed no signs of movement as he was placed on a backboard and, with his head and body immobilized, carefully loaded into an ambulance.

“It brought tears to my eyes,” Moorman said after practice. He said the sight of Everett’s motionless body brought back memories of Mike Utley, the former Detroit Lions guard, who was paralyzed below the chest after injuring his neck in a collision during a 1991 game.

Utley, Moorman recalled, at least was able to give what’s become a famous “thumbs up” sign as he was taken off the field. Everett didn’t.

Utley, who lives in Washington state, was saddened to see replays of Everett’s collision.

“I’m sorry this young man got hurt,” Utley told The AP. “It wasn’t a cheap shot. It was a great form tackle and that’s it.”

Cappuccino said Everett was alert and aware of the extent of his injuries.

“I told Kevin that the chances for a full neurologic recovery were bleak, dismal,” said Cappuccino, who works for the Bills as a consultant, specializing in spinal surgery. “I was honest with him, and he told me, ‘Do everything you can to help me.”‘

Cappuccino received permission to operate from Everett’s mother, Patricia Dugas, who spoke by phone from her home in Houston. She and other family members arrived in Buffalo on Monday. Everett was born in Port Arthur, Texas, and played high school football there.

Buffalo’s 2005 third-round draft pick out of Miami, Everett missed his rookie season because of a knee injury. He spent most of last year playing special teams. He was hoping to make an impact as a receiver.

The Bills now attempt to refocus while preparing to play at Pittsburgh on Sunday.

“It’s difficult because you know the situation,” said running back Anthony Thomas, one of Everett’s best friends on the team. “We have to move on. But he’ll always be in our thoughts and in our prayers.”

Quarterback J.P. Losman said it was difficult to concentrate during practice.

“It seems like every couple of seconds that go by it’s always popping into your head,” Losman said. “Going through a walk-through, we’re looking for him, wanting to hear his voice.”

“We honor ourselves by our work, and we honor Kevin by moving forward and working while never forgetting Kevin and never getting him out of our thoughts and prayers,” Jauron said. “We’re going to wait and see what the outcome is here and we’re really hoping and praying for the best.”