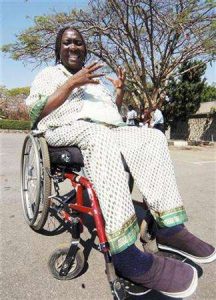 LONDON (Reuters) – A 6-year-old Palestinian girl may be about to experience at first hand the gulf between care of spinal injuries in the rich world and developing countries.

An Israeli missile strike on a militant leader in the Gaza Strip in May last year killed most of Maria Amin’s family and wrecked her spinal cord so high up that she lost not only the use of all limbs, but also the ability to breathe for herself.

Somehow, the Palestinians kept Maria alive long enough to get her to Israel’s renowned hospitals.

Israel’s defense ministry paid for her treatment there, but now wants to return her to the Palestinian territories — to medical centers that can only provide a fraction of the care she has received, and may be overwhelmed if her condition worsens.

In a developed country, proper care, equipment and money can make life relatively long and productive, even for someone with such severe disabilities.

Yet in the developing world, even surviving such an injury is practically unheard of. Living with it long-term, with all the expense of permanent care, is all but impossible.

Paraplegics — those with broken backs who retain full use of their arms and hands — should be able to live for as long as the able-bodied, provided they have access to the information and equipment they need.

Sometimes this may mean no more than good information and relatively basic equipment such as pressure-relieving wheelchairs and mattresses.

But charities say that in developing countries, most paraplegics are dead in two to three years.

Others linger for years in hospitals or nursing homes, rarely if ever making it out of bed and often suffering repeated pressure sores and resulting infections.

Gladys Charowa broke her back in a car crash in Zimbabwe just before Christmas 2001. She was released from hospital in April 2002 at the same time as 19 other people with spinal cord injuries. By November, she was the only one still alive.

“They died because of poverty and lack of information,” she told Reuters by telephone. “If you are Paraplegic and you are carried in a wheelbarrow instead of a wheelchair, then of course you will get pressure sores.”

Exactly a year ago I broke my neck on assignment for Reuters in Sri Lanka. Unlike Maria, I just about kept the ability to breathe. My arms and legs no longer function.

In the capital Colombo, a doctor told my colleague that people with my level of paralysis were often simply left on side wards to die from pressure sores or pneumonia if there was not enough money to provide proper care.

Maria’s Israeli hospital says the Palestinian medical centers similarly lack the capability to cope with her, particularly if her condition deteriorates.

She still cannot breathe for herself or move her limbs, but she can drive an electric wheelchair with built-in Ventilator, using a chin-operated joystick. Her father must do everything for her, from washing to feeding.

And if her ventilator stops, she dies.

With the Gaza Strip, her home, now under virtual blockade since the Islamist group Hamas took over the territory, Israel wants to send her to the occupied West Bank.

She may not be sent back — her case is up before Israel’s Supreme Court this month, and her Israeli hospital for now says it will not allow her to be discharged unsafely.

Charowa, who now works for a disabled women’s association in Zimbabwe, says that five years ago in her country, 90 percent of people died soon after sustaining spinal injuries.

Now, thanks to better information — and proper wheelchairs and cushions — that rate is down to 20 percent.

She credits a British charity, Motivation, with most of the change — although she now fears that Zimbabwe’s hyperinflation may take away people’s ability to buy essentials such as Catheter tubes or even food, setting life expectancy back again.

Motivation was founded by the British quadriplegic David Constantine — who himself has some limited movement but needs full-time care — and provides training and cheap wheelchairs, cushions and prosthetic limbs in the developing world.

“We see a huge change in attitudes,” Constantine told Reuters. “It’s a very effective way of spending money — you see the change in people’s lives immediately.”

Equipment is only half the story. Patients in the developing world often cannot afford to pay for a caregiver, so that the task falls to family members without training.

Money really can make all the difference. One quadriplegic in Zimbabwe who was able to afford the necessary equipment and care has survived since 1982, Charowa said.

Even in the world’s richest countries, ageing populations and limited resources are straining health systems’ capacity to fund long-term care for those who cannot afford it themselves.

In parts of Britain, care plans for the newly disabled are already less generous than they were several years ago.

A lack of beds in specialist spinal units means some newly injured are stuck for months in hospitals barely able to cope.

After evacuation from Sri Lanka, I spent five weeks in a major British teaching hospital that failed to properly manage my bowels, leaving me constipated and at risk of a chain reaction of complications that could have led to a stroke.

Like spinal injury victims everywhere, I was still trying to absorb what had happened to me, and didn’t know what was needed.

“If you can’t ask for what you need, you simply will not get it,” said Constantine.