Most people might not say a spinal cord injury is a positive event in their lives. Brian Sheridan does. 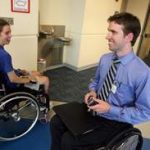 A life-long athlete who had hoped to play football at Central Michigan University, Sheridan was 18 when he tried to do a back flip at a gym but landed wrong. As he lay on the mat, all sensation draining from his body, Sheridan remembers thinking something wasn’t right.

But now, the 31-year-old says the injury opened countless doors and spurred him to become an Occupational Therapist, a small-business owner and a wheelchair rugby player. He’s also a father to 11-year-old Laken and runs a nonprofit group that helps bring modified sports equipment to disabled athletes.

“My injury was just one of those things,” said Sheridan, of Royal Oak. “It began a new phase in my life. I was lucky.”

In his day job at the Detroit Medical Center’s Rehabilitation Institute of Michigan, Sheridan helps others with spinal cord injuries. But he also has started helping to set up a wheelchair sports program in Colombia after a patient, Juan Pablo Salazar, came to the institute for treatment after his own injury.

Salazar, 27, dived into some water near the Rosario Islands in Colombia in May 2004, breaking his neck. He is paralyzed from the shoulders down.

Salazar came to Michigan in May 2005 for treatment. Sheridan was his therapist. The two men struck up a friendship and when Salazar left Michigan to return to Colombia, he called Sheridan to say he wanted to set up a sports program there.

Salazar had founded Arcangeles, an organization to help the disabled in Colombia.

“We are beginning teams in four cities proving that through sport you can rehabilitate physically, mentally and socially,” Salazar said in an e-mail.

Sheridan went to Colombia with several members of the Michigan Storm Quad Rugby Team on a goodwill mission March 24 through April 2 to introduce wheelchair sports to that country.

Quad, or wheelchair, rugby is played four-on-four with participants in specially built wheelchairs on a basketball court. Players, both women and men, use a volleyball that’s passed, dribbled, rolled, thrown or carried across a goal line to score points. The game moves fast and is full-contact — Sheridan is nursing a finger injury in the off-season. The season runs October to April.

The sport is popular. A documentary film, “Murderball,” was made on the sport. Sheridan knows several of the players in the film. Sheridan has tried out three times — and been turned down three times — for the national team.

While in Colombia, Sheridan said, the team played exhibition games and helped train athletes there in the sport. He and Salazar hope to establish four or five quad rugby teams in Colombia. Both men also hope Colombia has a team that can one day compete in the Paralympic Games.

Through sports, Sheridan says, people with disabilities can find strength and purpose. Without sports, he said, his life would not have turned out as well as it has.

“Participating in sports can show you how to be successful in many ways,” he said. “That shouldn’t stop just because you have a traumatic injury.”

Never walk again? Yes, he did