Christmas will be celebrated this weekend at 6-year-old Taylor Parker’s house. 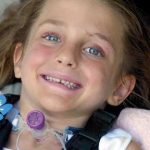 A Christmas tree stands in the front room; wrapped presents wait to be opened and lights decorate the eaves outside. Several neighboring houses are draped with icicle lights and holiday trim, showing Christmas colors in the late June heat.

Taylor missed Christmas last December, laid up at UC Davis Medical Center in Sacramento, after an accident in Chico injured her spinal cord.

Taylor’s mom, Tammy Parker, said the family decided to wait to celebrate the holidays when Taylor came home, and some of their neighbors decided to help them create the season by putting up Christmas lights and decorations for Taylor’s benefit.

She finally got home last month.

When Taylor came home, the rest of her family did, too, Tammy said. For six months, Tammy and fiancé Matt Sadler, and Taylor’s dad Chad Parker, stayed in Sacramento. Her 2-year-old brother Tanner Parker went back and forth between his parents, and spent time with friends and his grandmother.

A family member was always in Taylor’s room with her, Tammy explained, since she was so young and so fragile.

When Taylor was transferred from the medical center to Shriners Hospital for Children, family housing was available.

Taylor’s injury occurred when the SUV Tammy was driving was hit broadside at the intersection of Nord and West Eighth avenues on Nov. 16. Taylor, secured in a safety seat in the third row of the Lincoln Navigator, suffered critical injuries to her head and neck when the impact of the crash pushed her seat into a side window.

Taylor was rushed to Enloe Medical Center and stabilized for transport to UC Davis by medical helicopter. Tammy flew with Chad Parker in a private airplane to Sacramento after her.

Tammy described how she left home that morning to pick Taylor up from kindergarten at Emma Wilson School and didn’t return for six months.

“I told Taylor I wouldn’t go home without her,” Tammy said. But she admitted she went home once, a few days before bringing Taylor home.

“I came home one time, to get my bearings … I didn’t know how it would hit me,” she explained.

Thursday afternoon, Taylor grinned for the camera, but only answered questions shyly with one-word whispers or with a nod or shake of her head. She asked her mother to arrange her hair a specific way before any pictures could be taken.

Then her friend, Tiffani Kelly, 10, pushed Taylor’s wheelchair around the neighborhood.

“She’s doing so much better now that she’s home,” Tammy said, saying her daughter was eating better and sleeping better, and simply enjoying being home.

Although at this point Taylor can’t move her body below her shoulders, she has full feeling everywhere, Tammy said, and the family is not convinced she won’t improve more.

At UC Davis, Tammy continued, they were told Taylor had a 2 percent chance of survival. Later, they were told she would never be able to swallow, talk or breathe on her own, and she does all of those, although she uses some breathing support, especially when she’s sleeping.

If she’s already beat the 2 percent odds by living and accomplished so much more than predicted, Tammy said, “she’s not done improving.”

Taylor’s injury did not affect her brain, Tammy said. Her mind and mouth still work, and she’s had some timeouts as a result, like a typical 6-year-old.

She’ll be attending first grade at Chico Country Day School in August, with a family friend as her one-on-one classroom aide.

Fundraisers were organized by Emma Wilson and Chico Country Day schools, by Marsh Junior High students, and others — by people who didn’t even know Taylor.

For Valentine’s Day, all the classes at Shasta School sent her Valentines and in March, a benefit dinner was held at the Butte County Fairgrounds in Gridley.

In April, the Chico Area Recreation and Park District was asked about the possibility of installing a swing for handicapped children at the playground in the park near her home. The swing was ordered the same day.

“I just want to be sure everybody knows how thankful we are,” Tammy said.

All the donations were deposited into an account for Taylor’s use, when she needs them, Tammy said.

Staff writer Chris Gullick can be reached at 896-7760 or cgullick@chicoer.com.

WHAT’S NEW: After six months in Sacramento hospitals, Taylor came home about a month ago.

WHAT’S NEXT: The family plans to celebrate Christmas this weekend, having delayed it until Taylor could be home.

Three proteins could be new targets for treating stroke, brain and...