A life – in motion 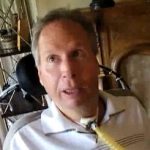 It was the early 1980s, and Robb Dunfield, 19, was ready to celebrate the first night of summer with his friends in Vancouver’s Spanish Banks.

Looking for a high spot to watch a flotilla of tall ships in the dimming light, they climbed up to the third floor of a condo under construction, and were ready to settle into an unfinished balcony.

The two-by-four that was the railing, attached to the skeletal building by two nails, gave way as his two friends put their weight on it.

“When I went to lean on it, there was nothing there,” he says. “I didn’t have a chance to react to it. I landed on my head.”

One friend broke a hip and had a lengthy hospital stay and the other was knocked unconscious with a severe concussion.

Compared to Dunfield, they “more or less walked away from the fall.”

He woke up two days later to see the concerned faces of his parents.

“Sorry,” he muttered – this coming from an active teen who time and again had seen his parents rush to the hospital to see him get stitches or have a broken bone set.

It began to sink in that this was no soccer injury.

“Can you feel this? Can you feel that?” Dunfield recalls the probing doctors and nurses asking. “I really didn’t know what was going on.”

He could breathe on his own and move his arms a little bit with the C3-5 spine injury. But with the swelling and bleeding, days later his injury deteriorated to a C2 level, leaving him fully paralyzed and reliant on a ventilator machine to breathe.

He was not expected to live, and a priest administered last rites. But Dunfield survived, and spent six months immobile in an intensive care unit.

His only residential option afterwards was the George Pearson Centre at Vancouver General Hospital.

For more than five years, he lived in a “warehouse” – a former polio ward of 30 beds occupied by people hooked up to respirators, separated by curtains.

“They really didn’t think we could be rehabilitated.”

With nothing to do but think, Dunfield and several patients in his situation began to discuss finding ways to live more independently.

“How do we get out of here?” was the question that united them.

The group of six had outlived predictions, and began a new battle.

They had to get off the property grounds just to discuss moving out, since administrators were reluctant about the idea.

They approached the B.C. Paraplegic Association – “They’re the only ones that believed in us.”

In 1985, Creekview opened in False Creek.

It was the world’s first independent living facility for people with high-level disabilities.

There were private rooms and no curfews.

He also found a girlfriend in a former nurse.

As his quality of life improved, he channeled new energy into his hobby of mouth painting.

“I realized I could actually make something look sorta like it was supposed to.”

His paintings would make their way to galleries and onto labels for about 20 B.C. wines.

In 2002, Dunfield became a full-time senior coordinator for the Rick Hansen Foundation’s Ambassador Program, where he helps recruit and train some of B.C.’s 5,000 people with spinal cord injuries to share their stories of overcoming seemingly impossible challenges.

Several years ago, Dunfield moved to private house in Cloverdale, complete with an elevator to the second floor and extra-wide doors for his electric wheelchair.

In his living room sits a book on the coffee table.

Full of a friend’s poetry and Dunfield’s paintings, the book, first published in 1998, is titled If Sarah Will Take Me.

By then, she already had.

Dunfield and Sarah, his former nurse, were married in 1992 and have 12-year-old twin daughters.

With the goal of supporting people with spinal cord injuries and fundraising for medical research, the local Rick Hansen Wheels in Motion event takes place on Saturday, June 13 – a day earlier in Surrey than other regions. The walk/roll event starts at 12 noon at South Surrey Athletic Park, 14600 20 Ave. Registration starts at 11 a.m. There will be food, children’s activities and entertainment, including Cloverdale singer Joe Given, who will perform from 11 a.m. to 12 noon. Wheels in Motion is also looking for volunteers for the event. For more information, visit www.wheelsinmotion.org, click on Event Locations and go to Surrey. To register, donate or sponsor a team, call Stan Leyenhorst at 604-802-2171