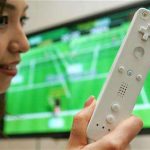 A little more than 13 months ago, I wrote a front-page story about a young man named Travis Taft, an avid gamer who had suffered a spinal cord injury affecting his arms and legs.

Here’s an excerpt from that story, which focused on Taft’s excitement about the one-hand controller Nintendo had described for its upcoming console, then code-named Revolution:

”(Taft) has tried to call national attention to the unintended benefits that the gadget will offer for people with a variety of physical disabilities.

“Like many people with spinal-cord injuries that affect all four limbs, Taft retains some use of his arms and hands. But it’s not enough for effectively operating the typical two-hand game device. He’s confident his relatively strong right hand will be able to manipulate the new controller, which is part of the Revolution game system that’s still under development by Nintendo.

‘’Video games have been a major factor in my life,’’ said Taft, who has resolved to take the most optimistic approach possible to his Rehabilitation. ‘’I was eagerly hunting for some way to get back into it.’’

So what happened when the Revolution became the Wii and actually reached the market? It’s nice to report that Taft’s condition has improved and that he’s more than enjoying his Wii.

Here’s one of the e-mails he sent me today:

“Both (of my) hands are better by comparison to where they were before, but the left is still behind the right. Like anything, there are pros and cons. The (Wii) motion sensing is better than I had hoped, and there is the unexpected benefit that I can have my hands independent of each other, unlike traditional controllers where your hands are forced to stay just a few inches apart.

”I wouldn’t say any one game is ‘perfect.’ So far I have Zelda, Wii Sports, Rayman Raving Rabbids, Trauma Center, Marvel Ultimate Alliance, and Metal Slug. I’m very happy with each and every one of them.’’

This is sort of a “Hey, way to go, Nintendo’’ post. But that’s secondary. This is the real point about the guy who said he was going to take the most optimistic approach possible: Way to go, Travis!