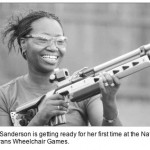 MANSFIELD — Lola Sanderson was intrigued when she saw Jonathan Merchant hand-pedaling a three-wheel cycle on the road near her house.

He was young and disabled. So was she.

But he also seemed to be on a mission.

“I just had to swing my van around and go talk to him,” she said.

Merchant and Sanderson, both quadriplegics, were to be among 25 Texas disabled veterans and more than 550 expected participants in the 27th annual games. Merchant dropped out recently because of an illness; Sanderson is continuing with his support.

“Since my accident, I’ve just been seen as a wife and mommy,” said Sanderson, 31, whose spinal cord was injured in a car crash five years ago. “You tend to ask, what happens to the rest of your life? Meeting Jonathan opened my eyes. You can accomplish a lot more.”

There are about 3 million disabled veterans in the U.S., and 176,000 of those use manual wheelchairs because of injuries or disease, according to a 2004 Department of Veterans Affairs study.

The National Veterans Wheelchair Games began in 1981 in Richmond, Va., with seven events; it now has 27 events including track and field, swimming, basketball, weightlifting and softball.

“Sports can be a very important part of Rehabilitation,” said David Autry, a national spokesman for Disabled American Veterans, a veterans service organization with about 1.4 million members. 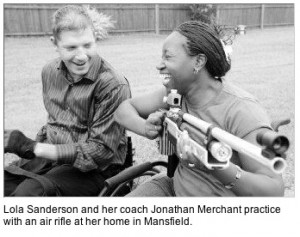 “It’s bad to just sit there, slumped in your wheelchair, watching TV and feeling sorry for yourself,” he said.

This year’s games includes 120 first-time participants and only about 27 veterans injured in Iraq and Afghanistan, said Dave Uchic, spokesman for Paralyzed Veterans of America.

Because of improved protection and medical treatment, the war has produced fewer disabled service members than previous conflicts, he said.

“Ironically, that has limited the pool of potential participants in the Games,” Uchic said. “Very fortunately, we’re not picking up huge amounts of service members since the [Iraq] war started in 2003.”

Sanderson’s life changed March 18, 2002, while she was stationed on the USS Saipan at Norfolk, Va.

She lost control of her car on a rain-slick road, and it rolled into a ditch. The seatbelt she credits with saving her life crushed two Vertebrae in her neck. Although a quadriplegic, she has regained some control of her right side after months of therapy.

Her Depression after the incident was tempered by her ongoing responsibilities as a wife and as mother of a daughter and son, who were 8 years and 16 months old at the time of the accident. She and her husband, Kevin, now have three children.

“Throughout the months and years, my family, my husband have kept me grounded, so I didn’t have that big a remorse,” she said. “Of course, I wish I could get up and walk around.”

Merchant was in the Army, stationed at Fort Hood, when a car he was in lost control and crashed Dec. 11, 1999. His spinal cord injury left him with no feeling below his chest, but he has some movement in his arms and wrists, which allows him to compete.

Unlike Sanderson, Merchant didn’t have family to rely on.

“When I got out, I was by myself, and I had to get into an apartment — it was a lot different,” said Merchant, now 30 and married.

“It wasn’t until a few years after my injury that I got to where I knew my purpose was to inspire others,” he said. “It took me a while to get over my anger. That was the hardest part of the injury.”

Merchant has competed in the National Veterans Wheelchair Games in each of the past four years, medaling in a variety of handcycling, track and swimming events.

Now he and other trainers are helping Sanderson prepare for her first Wheelchair Games.

She chose five of the 27 medal events — air rifle shooting, archery, wheelchair racing, bowling and nine-ball billiards. Almost all are new to her.

“I’ve done bowling before,” she said. “That’s the one thing I really knew how to do before my accident.”

Since meeting Merchant in March, Sanderson has met other disabled veterans and begun developing camaraderie she had never experienced.

Merchant is trying to drum up area competitions for North Texas’ disabled veterans.

“In the disabled world, it’s not every day you meet someone who has the same interests you do,” he said.

The 2007 National Veterans Wheelchair Games will be in Milwaukee, Wis.

When: Tuesday through Saturday.

Who: The multievent sports and rehabilitation program is for military service veterans who use wheelchairs for sports competition because of spinal cord injuries, amputations or certain neurological problems.

What: The event attracts more than 500 athletes each year and is billed as the largest annual wheelchair sports event in the world.

By ROBERT CADWALLADER
Special to the Star-Telegram

Documentary chronicles the passion and perseverance of Nick and Marc Buoniconti