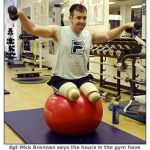 When Sergeant Mick Brennan was caught in a suicide bombing in Iraq, the outlook was bleak.

Hurled 25 ft by the force of the explosion, the former keen runner and boxer lost both legs and suffered an injury to his brain. He struggled to control his anger and faced a long Rehabilitation.

Now, however, Sgt Brennan is fighting to represent his country again – at the 2012 London Paralympic Games.

The 27-year-old, is one of 42 amputee soldiers who last month received letters offering them a chance to compete for a place in the Paralympic squad.

Last week, he got his first taste of rowing and performed so impressively that coaches have invited him back for more trials.

“My friend started doing the sport and thought it would be right up my alley, what with my strength and fitness,” said Sgt Brennan, a member of the Royal Signals regiment.

“It was my first time in a boat and first time on a rowing machine but the feedback was very good.”
advertisement

Hours in the gym have helped him cope with the aftermath of the car bomb near Camp Dogwood, a military base south-west of Baghdad, three years ago.

“I needed to channel my energies into something and sport has always been my thing,” said Sgt Brennan, who has spent much of his recovery period at the Ministry of Defence’s rehabilitation centre at Headley Court in Surrey.

“Doing weights and strength work gets rid of some of my aggression. Because I haven’t got any legs, I just release my energy in a different way.

“A year after I got my injury, I found out that I had a head injury as well and that led to anger management problems. The gym is one of my main strategies to cope with anger.”

He is a beneficiary of an initiative led by Major Andy Neaves, the second-in-command at Headley Court, in a joint venture with the British Paralympic Association (BPA).

Major Neaves has contacted all the amputees on his database, including those who have returned to their units, and plans to expand the -programme to soldiers suffering from spinal injuries.

“Many of my servicemen have grown up playing a high level of sport and have a naturally competitive nature,” he said.

“They’re not all going to be Paralympians, but what I want to do is to give them the opportunity to do tennis, -athletics, rowing or whatever, maybe at a local level at first.

“Obviously, the perk for the British Paralympic Association is that they can then talent-spot.”

The widespread use by terrorists of roadside and suicide bombs in Afghanistan and Iraq has led to dozens of British soldiers suffering severe injuries.

Headley Court has dealt with 42 amputees since it became fully operational and work is under way on a new ward which will raise the centre’s bed capacity from 36 to 66 and allow it to treat service personnel with head and spinal injuries.

Among those being treated is Pte Lionel O’Connor, 22, who lost a leg when he was hit by a roadside bomb in Basra 12 months ago. He, like Sgt Brennan, has signed up for the Paralympic programme.

“I’ll do anything that they think I’ve got talent at,” he said. “I’m willing to try anything.”

The presence of military personnel in Britain’s 2012 Paralympic team will mean that Disability sport has come full circle.

The Paralympics originated as an athletics competition for Second World War veterans with spinal cord injures. It was first staged at Stoke Mandeville Hospital in Aylesbury, -Buckinghamshire, to coincide with the 1948 London -Olympic Games.

More recently, the United States and Canada have led the way in encouraging injured servicemen to take up Paralympic sport.

By 2012, it is estimated that 10 per cent of the 500-strong American team will come from the military.

Dame Tanni Grey-Thompson, Britain’s most successful disabled athlete and the patron of the BPA, believes that the British armed forces could play a similarly important role in 2012.

“If you’ve been through the military you know about -training hard, you know about listening to instruction and you understand what it takes to achieve,” she said.

“Those are really important core principles that you have to have if you want to be a Paralympian or an Olympian.”

Pulling on a British vest in five years’ time may seem a distant dream for Sgt Brennan but the prospect inspires him as he lifts weights in the -Headley Court gym.

“I started off here after I was injured and, having been so close to Headley Court, the idea of people who are going through the same sort of -experience as me coming to cheer me on would be -absolutely fantastic.”

“I have a lot of sports to play”, says wheelchair basketball...