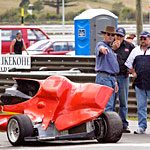 Speedway officials still insist the sport does not need a safety overhaul despite another accident in a series that has claimed three lives in four weeks and left two men badly injured.

A 42-year-old father of three became the latest injury victim when his racing car slammed into a concrete wall and flipped three times at Kaikohe Speedway’s Easter Stampede yesterday.

George Waa was last night in a serious condition in Northland Base Hospital after being airlifted from the scene about 12.30pm. He has serious chest injuries, including bruising to his heart and lungs and broken ribs.

Meanwhile, Ben McLean, 23, remains in the Burwood Hospital spinal unit in Christchurch after he fell from his sidecar bike at Meeanee Speedway in Napier on Friday and was struck by a following bike.

McLean’s mother, Wendy McLean, said one of his Vertebrae had popped out and severed his spinal cord.

She told TV One the family had been warned he had only a 10 per cent chance of walking again.

“Knowing Ben and [his wife] Holly’s determination in backing him he will turn that into a 20, 30 and a 40 before long.”

Speedway New Zealand chief executive officer Josh Cleaver said last night that the string of accidents was “very, very unusual” and did not show speedway was too dangerous.

“I don’t think so at all. I think we’re going through a very bad patch at the moment. They are just freakish accidents that are all different from each other and all happened in different circumstances.”

Mr Cleaver said Kaikohe Speedway was known as a “black track” because it was not licensed by Speedway New Zealand, which has 23 tracks around the country.

“Any major accident is a concern and we investigate all of them. We will look to see what caused it and what effect it may have on our tracks.”

“In Motor racing there’s always a bit of carnage. Any sport is dangerous. All our riders are aware of the danger and we did everything by the rule book.”

She said Mr Waa was over-correcting when he appeared to lose control on the dirt track. His safety gear included a roll-cage, helmet, neck-brace and fireproof clothing.

Ms Beadle-Taylor said the cause of the accident would be investigated by the Circle Track Racing Association, which the speedway was part of, and would be reported to the police.

Association president David Wakefield said last night that the standard of the Kaikohe track was exemplary.

“In every race, car drivers go on to the track knowing accidents happen and they could be the victims of injury or death. It’s not a sport where you are wrapped in cotton wool.

“The possibility of an accident is there all the time.”

Mr Wakefield said safety measures were continually being reviewed and it was unusual to have a spate of serious accidents.

The weekend’s accidents follow a series of crashes in the past month.

On March 11, in another sidecar crash, passenger Jack Thompson, 20, died two days after a bike driven by his father, John, crashed in the final round of the national championships in Pukekohe

On March 31, 13-year-old spectator Charlie Christopher Higgins was killed in Blenheim when a sprint car somersaulted over a safety barrier and struck him.

On March 17, Quad-bike racer Luke Zion McCrostie, 18, of Alexandra, died after colliding with another bike and crashing into a wall at the Cromwell Speedway in Central Otago.