Idland honored for his work as disability activist 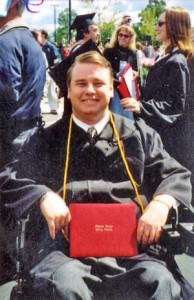 The son of former Ramsey County deputy sheriff Gerry Idland of Devils Lake was inducted into the Spinal Cord Injury Hall of Fame in the category of Disability Activist last fall.

Shane Idland of Kelseyville, Calif. was honored at the John F. Kennedy Center for the Performing Arts in Washington, D.C. He is also the half-brother of former Devils Lake basketball standout Gerry Idland Jr., who now lives near St. Cloud, Minn.

Idland was injured nearly 13 years ago in an automobile accident that caused a spinal cord injury, leaving him paralyzed and wheelchair-bound.

In May of 2005, he created the ADA subcommittee to work in all inaccessible barriers throughout the community of Lakeport, where he currently lives.

“Pat (wife) and I are very proud of Shane,’’ says Gerry. “He’s been a big advocate for the disabled and his nomination for the Hall of Fame is just great.’’

Idland was voted chairperson by members of the subcommittee and brought many of those barriers to the attention of the Lakeport City Council and the Traffic Safety Advisory Committee.

Because of his efforts, changes happened around Lakeport and Idland vowed to continue bringing attention to all the inaccessible barriers around the community.

Idland returned to college after his accident and began advocating all the changes he was able to pursue in buildings, classrooms, libraries and computers.

He graduated from college with a psychology degree and now is a vocational counselor for persons with disabilities as well as serving as chairman of an ADA sub-committee in California.

The National Spinal Cord Injury Association created the SCI Hall of Fame to celebrate and honor individuals and organizations that have made significant contributions to quality of life and advancements toward a better future for all people with disabilities and spinal cord injuries.

NSCIA has nearly 100 qualified nominees in 14 different categories. Members voted online to determine finalists in each of several categories, and Idland was a finalist in one.

Finalists were then reviewed by a broad-based selection committee to make the final determination of the inductees. All nominees were invited to attend the ceremonies in Washington.

Idland got incredible help from friends, family, community members and others to help with expenses for the trip, which were estimated at $3,500 for himself and his personal care provider.

“Locomotor” Therapy May Bring Movement Back After Paralysis