Injured rider is back in the saddle

Less than a year after breaking her back in a horseriding accident, Katie Estrella rides again. 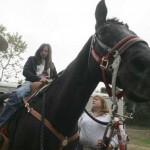 FULLERTON- The crowd cheered as Katie Estrella rode into the horse ring Saturday, her “Cow Girl 2006” silver belt buckle hidden behind the shirt she had buttoned up against the chill.

There were “woo hoos” as the 12-year-old circled the barrels on her horse and yells of “you go girl” as she rode to the finish line. Even her 96.345-second time – more than a minute longer than a typical Gymkhana race – brought applause.

“That was a testament that miracles do happen,” said the announcer.

The miracle wasn’t that Katie finished, it was that she was riding at all.

Last year on Mother’s Day, Katie was competing in a similar horse show in Riverside County when her horse bucked her off. Instead of getting up and brushing herself off, as she had done numerous times before, Katie laid there, her back broken in the fall. The T4 spinal cord injury cut sensation from her mid-chest down.

Months of medical care followed, including Rehabilitation at the Kennedy Krieger Institute in Baltimore, where the doctor who worked with actor Christopher Reeve is now treating children with spinal cord injuries.

Two rods were inserted in Katie’s back and she underwent strenuous Physical Therapy to strengthen her upper body muscles. She is now able to walk a short distance with leg braces and a walker.

Katie had a singular goal – getting back in the saddle. It has been her passion since her mother bought her a pony when she was 5 while they still lived in Orange County before moving to Norco. Even though she’s now in seventh grade, when a young girl’s fancy often turns to boys, horses were still high on Katie’s list.

WITH A LITTLE HELP: Katie Estrella, 12, gets situated in the saddle atop Whoknox, a friend’s 30-year-old horse as her mother Dana helps at right while at the Fullerton Recreational Riders Horse Show Saturday. At left is show manager Brian Button giving a little assistance.

PHOTOS: KEVIN SULLIVAN, THE REGISTER
Her return began slowly in February with therapeutic horseback riding at the J.F. Shea Therapeutic Riding Center in San Juan Capistrano. Saturday was her first appearance back in the ring with the Fullerton Recreational Riders

It was a team effort. Chris Failla lent his horse, Whoknox, a gentle black steed known to many first-time horseback riders in Orange County for his easy temperament.

Three people helped Katie up on the horse, which stands 15.2 hands – more than five feet tall from the ground to his withers. Katie’s mother, Dana, and a friend, Jodie Ramirez, walked on each side of her while Failla led the horse by the halter.

It wasn’t so much a race as an appearance as Whoknox walked his way around the course. When it was over, Katie was all smiles.

“I was anxious at first because (Whoknox) seemed to really want to go, but then he was fine,” Katie said. “It felt a little big weird not to be going fast.”

“It was so exciting for me to see her get to do that again,” she said.

Although Katie admits, almost wistfully, that her fast-paced barrel-racing days are probably behind her, she is already thinking about other kinds of horseback competitions. Based on her progress, her family and friends have no doubt she can do it.

Earlier she joked with her father, noting that when she gets married, they could both roll down the aisle in their wheelchairs – hers from her injury, his due to old age.

“No you won’t,” said Katie’s friend Heather Moore. “By that time, you might be walking.”

Facebook
Twitter
Email
Mix
Digg
Previous articleStingley inspired with way he lived after injury Stingley, who died at age 55, was a symbol of hope
Next articleikanbowler.com