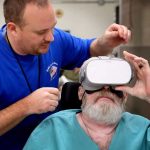 ST. LOUIS COUNTY — A car wreck in 1983 paralyzed Navy veteran Mike Erbe from the waist down, but he fought to stay positive, stay active. He finished his engineering degree. He got his pilot’s license.

It’s getting harder, though, as he gets older, especially while staring at four hospital walls. A urinary tract infection that became life-threatening landed Erbe, 72, of Alton, in the St. Louis VA Medical Center last fall, where he has since been trying to recover.

But lately, he’s been fly fishing, downhill skiing and floating around in a spacecraft, which is helping a lot.

“Are you going to fly with the Blue Angels today?” asks Luitjohan, who specifically works with spinal cord injury patients.

Last summer, the St. Louis VA began integrating virtual reality into therapy for patients with paralysis. Much more than a cool diversion or entertainment, it’s a useful tool in helping patients cope and encouraging them to lead active lives.

When wearing the goggles, users see a simulated, three-dimensional world. The latest technology includes wireless hand-held joysticks that allow users to manipulate and explore their virtual surroundings. They can move through a small space with perceived barriers such as a wall or edge.

Patients can box, learn tai chi, shoot a bow and arrow, and even feel like they are reeling in a big fish.

“We can have a veteran in a funk, where their life has drastically changed, and show them that just because things are different, doesn’t mean you can’t do this or do that. It’s still possible,” Luitjohan said. “It just takes adaptations.”

New therapeutic programs designed for virtual reality not only can help with pain management and behavioral therapy, but also have the capability of measuring things such as reaction time, range of motion and cognitive function to determine whether patients are progressing.

One maker of the applications, XRHealth, was founded about four years ago in Israel. The St. Louis VA runs one of only 50 hospitals in the two countries — and the only veterans hospital — using the company’s technology to improve health in a variety of ways, says CEO Eran Orr.

“At the end of day, we believe this technology can help patients improve their well-being and improve health outcomes,” Orr said. “We believe we should treat this technology as a medical device, not just another gaming or patient-experience tool.”

“Ohhh, dude. He’s about 20 feet off the runway, burning down the runway. Oh no. Hard turn,” Erbe said as he virtually flies in with the U.S. Navy’s aerobatic demonstration squadron, feeling the gravitational G-force. “They must be taking about 7 or 8 Gs. Ohhh, man.”

Next to Erbe, Dale Setzer, 70, is going skydiving. Luitjohan has an iPad that allows him to see what they both are seeing. “There goes your plane,” he told Setzer, “hope your chute works.”

Setzer retired in August. A month later, he crashed his motorcycle during a road trip through the Appalachian Mountains. He was paralyzed from the chest down.

Using virtual reality has played a role in his recovery, said Setzer, a Kansas City-area resident who served in the Army as a combat engineer and jungle warfare instructor from 1969 to 1972. “They convinced me life wasn’t over, and I have a lot of things I can do, I just had to work on it and take it one day at a time.”

Luitjohan and fellow recreational therapist Charley Wright have been interested in incorporating virtual reality into their therapy for the past few years. It became feasible when the equipment became wireless and more affordable (the headsets range from $300 to $500), and the video quality and selection grew.

The St. Louis VA has six virtual reality headsets and space measured on the floor of the vet cave for their motorized wheelchairs to move.

With improvements in 360-degree cameras and a free online collection of virtual videos on YouTube, patients can experience almost anything — zip lining, kayaking, driving a race car, touring a museum or meditating on a beach.

Some veterans can be in the hospital recovering from issues such as major pressure sores for as long as a year, the therapists said.

“It can be boring lying there in bed with only a TV and laptop or people coming to visit to play board games or cards,” Luitjohan said. “Thirty minutes to go somewhere completely different, away from there, is a big change for them.”

Luitjohan and Wright have taken use of the technology further by strapping their own 360-degree cameras to paralyzed athletes participating in adaptive sports like surfing and rock wall climbing, and creating their own virtual videos.

Each year, the therapists take patients to participate in adaptive activities at the Veteran Winter Sports Clinic in Aspen, Colorado. They also take a trip to the Georgia Aquarium in Atlanta to scuba dive with whale sharks and beluga whales. Some, Wright said, are scared to go.

“My hope is that when we show them the videos, they’ll actually want to sign up and go do it,” he said. “That is the full circle of rehab.”

Since many VA patients come from long distances, Luitjohan said, plans are in the works to use the technology to create a virtual replica of patients’ homes before they leave the hospital so they can practice navigating the space to see if adjustments are needed.

The therapists also see benefits in socialization applications, where users can interact with each other’s avatars from a hospital room or home. “They share a bond from being in the military,” Luitjohan said. “Having a social piece where they are able to join and gather with other vets is helpful.”

The use of virtual reality in health care is rapidly evolving and growing, especially as it becomes more affordable.

Some companies have created programs that help caregivers see what it’s like to live with sight or hearing disorders, or even Alzheimer’s by making surroundings confusing. It’s being used to manage pain during physical therapy, teach medical students, test for concussions, teach social skills to people with autism and practice surgeries.

Studies have found positive outcomes in using virtual reality in conditions such as addictions, anxiety disorders, phobias, stroke rehabilitation and pain management. Larger, more rigorous studies are needed, however, to standardize its use in medicine.

“Virtual reality is like a tool box,” Orr said, “and it’s up for the clinician to decide what tool to use from that tool box.”

Aimee Jamison, 50, of Bronston, Kentucky, was in the St. Louis VA hospital from July to December last year after falling from a ladder and shattering her vertebrae. Jamison was paralyzed from the waist down, except for some strength that remained in the front of her legs.

Using a harness, she is able to move her legs on a treadmill. After having tried virtual reality in recreational therapy, she asked her physical therapists, “Can you set me up so I can feel what it’s like walking in Ireland? I’ve always wanted to go and never been.”

Before her accident, Jamison was a runner, a swimmer and had just opened a quilt-making business. “My world was turned upside down,” said the former counter-intelligence special agent. She feared no longer being active.

The technology helps her feel like she’s driven a boat through obstacle courses, sunk a basketball and touched the ocean from a surf board.

“It makes you want to be able to do that,” Jamison said. “It creates a mental environment that makes you feel like you can do it.”

She’s now learning to scuba dive. On a recent trip back to the St. Louis VA to test robotic legs, she took 373 steps.

Wright said he hopes the therapy encourages more of the vets he cares for to live fully.

“Whatever this opens up for them, helps,” Wright said. “It might open up doors to things they never even thought they would do even when they were able-bodied.”

Erbe said he’s guilty, just like a lot of people, of getting into a rut and living life’s daily routine as if there’s no other option. The virtual reality makes him see what’s possible.

“It makes me think when I get out of here, I will do those things,” Erbe said. “It’s very good for your morale, your well-being. … This is building a fire, for sure, like stoking the coals.”

Stingley inspired with way he lived after injury Stingley, who died...