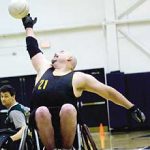 DURHAM – The ease with which the competitors zipped up and down the court made one almost forget they’re missing something most sports players have – the use of their legs.

Yesterday, the Northeast Passage Wildcats, the new quadriplegic rugby team at the University of New Hampshire, held its first tournament, competing against players from around New England and elsewhere.

The most obvious difference between this and other sports has to do with the use of specially designed wheelchairs – each has six wheels, two large ones on either side, and four smaller ones in front and back.

Players have one thing in common: a Disability affecting both their upper and lower limbs. And while many people associate the term quadriplegic with someone who has suffered a spinal cord injury, there were those players who arrived at their fate through various means. One was a double amputee, and another, a burn victim who has limited use of his limbs.

Brad Williams, a member of the Wildcats who got involved with quadriplegic rugby around six years ago, became disabled after a motorcycle accident 20 years ago. Yesterday, his wife, Renee, and their two children, Kendra, 2, and Kelsey, 6, watched from the sidelines as dad broke a sweat on the court at the UNH Field House.

“With really good games, it can be like watching tennis,” Renee Williams said, noting the speed and skill developed on the part of those who play often.

Each rugby game consists of four, 15-minute quarters. According to Williams, each competitor prior to game time is evaluated by someone called a classifier, either an occupational or Physical Therapist, who assigns a point value to each player based on his or her level of disability. On the court, no more than four players, or a total of eight points, can be represented on each team.

Given a designation of two points, Williams’ husband is known as a mid-pointer.

The Williams family traveled from their home in Freeport, Maine, to take part in yesterday’s event. Williams said they first learned about quadriplegic rugby during a disabilities expo in Manchester in 2000. It didn’t take much convincing for her husband to become involved.

“Brad played in a tournament three weeks later in Maine,” she said.

Williams said during the first year of young Kelsey’s life, Brad was traveling around the country playing in tournaments.

Yesterday, asked what she enjoys most about watching the sport, the 6-year-old said, “Daddy scoring.”

A Williams family friend, Mike Whitehead, is also active in quadriplegic rugby, playing for the prestigious Team Canada. He was featured in the documentary film “Murderball,” which chronicles the up-and-coming sport.

Players aren’t holding back any when it comes to delivering punishment to their opponents. Like regular rugby, the game is full-contact, which is evident by the sounds reverberating throughout the gymnasium.

“The noise is phenomenal in a high-level game,” Williams said. “They’re just slamming each other.”

There are also rock-solid rules, such as a requirement to either dribble or pass the ball every 10 seconds. If this rule is broken, the other team gets the ball.

The competitions can be high-scoring, averaging around 40 to 50 points a game.

The game also takes a serious commitment; each custom-designed wheelchair can cost upward of $4,000.