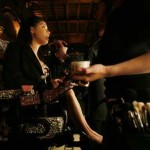 A group of specially designed wheelchairs built in Fresno rolled down a New York fashion runway during the city’s renowned Fashion Week as part of a first-of-its kind fundraising event.

The Rolling with Style Gala held at Cipriani’s in New York on Tuesday was designed to celebrate the lives of women in wheelchairs and raise awareness about paralyzed women’s health issues and spinal cord injury research.

Four women were honored for their personal courage and achievement during the black-tie event. And their Fresno-made Quickie wheelchairs were dressed up by well-known designers, including Nicole Miller, Kimora Lee Simmons and Marc Bouwer.

“This was really exciting to be part of an event like this,” said Avtar Kooner, plant manager at Sunrise Medical’s Fresno factory, maker of the Quickie wheelchair. “This is one of those things that our workers really feel good about. This really adds an emotional touch to what we do here.”

The Carlsbad-based Sunrise Medical — a world leader in the making of medical equipment — became a sponsor of the event through one of its vice presidents, Marilyn Hamilton.

“This was an absolutely over-the-top, spectacular event,” she said.

“This was really historic, and I am so proud and delighted to see it all come together.”

Hamilton, of Carmel, is one of four women who worked for nearly three years to organize the fundraiser.

They formed a nonprofit group called Discovery Through Design to battle stereotypes of women with disabilities and celebrate their accomplishments.

As part of the gala, guests were treated to a couture fashion show that included the four “roll models” being honored in their designer wheelchairs.

The women being honored were Rosemarie Rossetti of Ohio, Jenny Smith of Kentucky, Michele Boardman of Pennsylvania and Melissa Holley of Tennessee.

Proceeds from the gala were to go to organizations such as the Christopher Reeve Foundation, The Miami Project to Cure Paralysis and The Spinal Cord Injury Project at Rutgers University.

“When the first woman came down the ramp in her wheelchair, everyone just stood up and clapped. It was amazing to see,” Hamilton said.

Equally amazing, she said, were the wheelchairs. Workers at the Fresno plant spent four to five weeks working on the specially designed chairs.

“This was really a once-in-a-lifetime event for these women,” Hamilton said. “And they show that they have not let their Disability or their wheelchairs get in their way of their dreams.”
The reporter can be reached at brodriguez@fresnobee.com or (559) 441-6327.

By Robert Rodriguez / The Fresno Bee