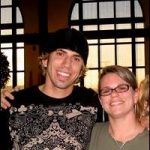 Three and a half weeks ago, Stowe native and standout athlete Jordan Carrell, 22, injured his spine in a snowboarding accident on Mount Mansfield, leaving him paralyzed from the waist down. Today, at one of the top spinal cord injury Rehabilitation centers in the country, the Carrell family defines the word “fortitude.”

“Jordan is a remarkable guy … his spirit is a very good, strong one and he’s a determined guy,” said Carrell’s stepfather, Rick Davis, speaking on the telephone from Atlanta, Ga., where Carrell is a patient at the Shepherd Center, a hospital that specializes in spinal cord injuries.

Davis; Carrell’s mother, Lynn; his girlfriend, Shannon Sullivan; and his best friend, Giam Talarico — who is taking the semester off from Boston University to be with his friend during his rehabilitation — have all moved down to Atlanta to support the athlete-artist with the movie-star looks.

Carrell, who had taken time off from college to work in Stowe and who was getting ready to enter Johnson State College in January to take business and art classes, spoke on the telephone Saturday. As he talked on the phone, he sat outside the hospital — for just the second time since his accident.

He said he has sketch books and pencils waiting to be used; sitting, among other things, he said, is a basic activity he now struggles with.

“It is difficult to do everyday things,” he said. “I just need to work as hard as I can because this is my life and my body.”

However, Carrell said, the amount of time he can spend sitting up increases as the rehab is going well and he has made remarkable progress.

“Everyday is waking up and working as hard as I can,” he said.

There is no prognosis from doctors, Davis explained, and no statistics are discussed, just a concerted focus on healing and learning how to work with what they have.

Saturday, the family was involved in a daylong training in which they learned how to help Jordan with all the challenges he faces now, including maneuvering a wheelchair.

“It’s all about hope here,” Davis said of the private hospital where Carrell is surrounded by many young men his age in treatment for similar injuries. “It’s conceivable he could walk out of there.”

Carrell’s mother created a Web site through caringbridge.org, a free service designed to provide a medium for communication between family and friends. People have posted hundreds of messages for Carrell to show how much they care.

Back home in Stowe, where Carrell was a standout basketball and soccer player in high school, three Stowe High School alumni games were played the last week in December in his honor, raising almost $7,000 towards incidental costs of Carrell’s rehabilitation.

Casey Wheel, Carrell’s friend since the second grade and fellow Stowe High School basketball teammate, made sure the annual alumni basketball game — where alums play against the school varsity team — was played in Carrell’s honor.

Wheel said Carrell was the team’s best player for two years, especially in 2002 when the team went to the state championship.

“He played hard; he wanted to win, you could see it in his face. He was fearless; he always was aggressive and played with a lot of heart. He was a leader,” Wheel said.

Wheel’s mother provided jerseys for the game with Carrell’s name and number — 23 — for the alumni to wear, a gesture Wheel called a highlight of the well-attended game.

“Jordan was a guy who somehow touched a lot of people in Stowe, and so they’ve turned out in terms of their love and compassion,” Davis said.

“It was amazing to see how everybody came together,” Wheel said.

Carrell, who graduated from Stowe High School in 2003, was snowboarding with friends in mid-December when he had an accident that fractured two Vertebrae and injured his spinal cord.

He was airlifted off the mountain to Fletcher Allen Health Center in Burlington, where he underwent a successful five-hour surgery to stabilize his spine.

On Dec. 27, Carrell was flown to the hospital in Atlanta, where he will be a patient for four to eight weeks until he graduates to outpatient status, which will take another two to six weeks, according to Davis.

His parents have rented an apartment, his best friend has rented an apartment and his girlfriend is living at the housing provided through the hospital. Carrell has two sisters and a brother — Betsi, Matt and Stefi — and his father lives in New Jersey.

“We’re holding up really well, and it helps having all sides to all families involved in this,” said Davis, who, in addition to Carrell, expressed gratitude for the support that their home town has shown.

“The town of Stowe is a small Vermont town, and the entire town has turned out for Jordan, it’s not just the games — that was one example.”

And every act of kindness contributes to Carrell’s recovery, according to the family.

Carrell said he is looking forward to getting out to the aquarium and other day trips the hospital offers.

“We’re going to take advantage of everything they have here,” Davis said.

Carrell said he has a new outlook on life since the accident.

“I feel like people should just appreciate everything and everyone around them,” he said. “I now have a whole different view, a completely different view towards life. … Things just keep getting better every day.”

Wheel believes the tenacity that drove Carrell as an athlete will serve him well during his recovery.

“He’s too stubborn to let something like this get in his way,” Wheel said.

You can visit Carrell’s Web site at:
www.caringbridge.org/cb/inputSiteName.do?method=search&siteName=jordancarrell

LeRoy realtor recovering from accident, back at work