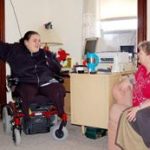 Local woman, in wheelchair for 20 years, hopes to drive to success

STERLING — After 20 years of sitting in a wheelchair, Rita Avitia is ready to get moving — with her education and future career.

Rita, who will be 40 years old this March, will graduate from Northeastern Junior College this May with an associate’s degree in sociology. She has already been accepted to the University of Northern Colorado at Greeley, where she hopes to pursue both bachelor’s and master’s degrees to become a school counselor. She even received a guarantee of assistance for her room and board at UNC from the Colorado Division of Vocational Rehabilitation as long as she stays a permanent resident of Sterling. It was a sort of scholarship worth around $8,000. All the details seemed to be coming together.

But there’s just one big problem — getting to Greeley and getting home to see her daughter, Shanta.

In Sterling, Rita relies on County Express to help her get around town, but even that service is not perfect, as it stops running at 6 p.m., but many of her needed classes at NJC have been held later than that. Without that service, her only option is to hit the streets in her motorized wheelchair, and bad weather, such as the recent snow storms, leaves her stranded and stuck.

“In order to be able to go to school, she has to get there,” Shanta Avitia said.

While Greeley has an adequate public transportation system which would help Avitia get around once she gets to UNC, her dilemma is that it costs upwards of $200 round-trip to get from Greeley to Sterling and back to Greeley by County Express. Avitia has only $700 per month to live on, and the cost would make it impossible for her to get home to see her daughter and the home that she is working toward buying in Sterling.

“I’m barely able to pay my mortgage and basic bills,” Rita said. “It’s really hard when you only get $700 per month.”

Her hope is that she will be able to acquire a wheel-chair accessible van with a lift for her wheelchair and hand controls that would allow her to drive it. Yet, these vehicles are not terribly common and are not cheap.

“A van would be nice to get out and get around,” Rita said. “The main reason I want a van is to finish my education without having to spend $200 round-trip every time to come home on weekends and spend some time with my family.”

Still, she knows that she will make whatever comes her way work. That’s what she has been doing since the car accident 20 years ago that took first her career as a certified nurse’s aide and her hope of having children and then her legs and independence.

Avitia has beaten her odds over and over throughout those 20 years. She did have a daughter, Shanta, who will graduate from Sterling High School this May, only weeks after Rita graduates from NJC.

She has found a new career to pursue that mimics the ability to care for and help people that she once enjoyed while working at nursing homes as a CNA. She has found ways to make her dreams come true, by taking advantage of resources available to her and — most of all — not giving up.

20 years ago
Rita does not remember the actual accident that changed her life. Instead, she knows about it through the stories told to her by her family and doctors.

Yet, the events of May 4, 1987, are quite sketchy. She does remember going to the Metro Honda car dealership with her aunt and her aunt’s boyfriend to get a 50-cent car part. She remembers laying down in the back seat and falling asleep.

“The next thing I remember is waking up to a polka-dotted ceiling and a bunch of tubes,” Rita said. “The boyfriend thought he could make the red light, but he didn’t.”

Rita said she was thrown out of the car through the small, back-seat, triangle-shaped window. She had serious cuts from the bottom of her neck that winded up over the side of her head and ultimately required 5,000 stitches. She lost two teeth and her tongue was cut in half, but was able to be sewn back on. But the most severe injury happened when two of her Vertebrae went through her spinal cord, leaving her paralyzed from the chest down.

It was the type of devastating accident and injuries that cause many people to shut down, to give up. And, for a while, Rita considered just that. She said she went through major bouts of Depression and was even suicidal at several points, but she was never able to go through with it.

And two years later, Rita accomplished something that both she and her doctors didn’t believe was possible — she became pregnant and went on to give birth to her daughter.

“When I found out I was pregnant, I was trying to commit suicide,” Rita said. “It didn’t work. Then, the doctors wanted me to have an abortion.”

But, Rita had been baptized in the Catholic faith only weeks earlier, and she couldn’t follow the doctor’s order.

“That baby was to be born,” she said.

Before giving birth, Rita had another cross to bear — she had to have her mother assume custody of her daughter after birth just to keep social services from taking her completely away from Rita.

So, the next part of Rite’s life became all about trying to stay a part of her daughter’s life, prove that she could be a mother to little Shanta, and retain her sanity and motivation to keep on living.

Finding her passion
Several years ago, Rita decided she needed to go back to school. She entered NJC not really knowing what she was going to study or do, but she received guidance and inspiration from the counselors there, who led her into sociology courses and helped her recognize her gift for talking to people and helping them with their problems.

It was something she had been doing for her daughter, her friends and others for as long as she could remember — listening and trying to help them.

“I’m like everybody’s sounding board,” Rita said. “It makes me feel good that I can be there for them.”

She dove into school, doing as much as she could while dealing with being a mother and her day-to-day challenges.

Now, she’s getting ready to end her time at NJC and move on up to a four-year-school, where she can get a bachelor’s degree in psychology and then a master’s degree in counseling. Her goal is to come back to Sterling with those degrees and become a counselor at NJC, just like the ones who helped her so much.

“That’s where I want to work,” Rita said. “I want to help people with their problems, even the little ones, like ‘My boyfriend’s a jerk!’ I want to help kids follow their dreams, because dreams are important.”

Shanta said that’s what her mom did for her — help her follow her dreams.

And Sterling is the perfect place to be a counselor, Rita said.

“That’s why I bought this house,” she said of her one-story house on Douglas Street. “I like the city of Sterling. It’s quiet. You can leave your doors unlocked sometimes and still feel safe.”

Many people in Sterling have supported and helped Rita on her journey, and one of her major supporters, Rita said, has been the Rev. David Baines of New Beginnings Outreach, which is the church Rita attends.

“They’ve showed me so much love,” Rita said.

“She’s always been a go-getter,” Baines said of Rita. “She’s a caring person. I believe (a van) would help her. On Sunday, she wanted to be in church, but there was no way (due to the snow). Transportation has really been hindering her. For us, it’s common to get a large basket of groceries. She can only get one or two bags at a time. I look at her and just admire her courage and tenacity.”

And that is only if she can get to the grocery store.

Kathy Hulfe, a rehabilitation case coordinator at Craig Hospital, where Rita has often been treated, said that it would be very easy for Rita to get stuck if she went out on the streets when it snows.

“Think about all of our cars that get stuck,” Hulfe said.

She said that the purpose of wheelchair accessible vans is to give people more independence and allow them to live on their own. Hulfe said Rita uses a motorized wheelchair with a power lift that allows her retain more shoulder function than would a manual chair, which could be loaded into a regular car.

“The bottom line is you cant’ load a power chair into a car,” Hulfe said.

Rita’s home health care nurse, Machelle Grosfart, said Rita does what she has to do to get to school, but it would be a lot more convenient for her to have her own transportation.

“I know she has to get up awful early to get all of her medical needs and then wait for the bus,” Grosfart said.

Yet, she has watched Rita do everything she can to get to her classes or church or wherever she has to go.

“One thing with Rita, though, is that school has been the best thing for her,” Grossfart said. “Her whole attitude toward life and helping people has changed her for the better. Rita has found a purpose.”

Grossfart said the van would not just giver her independence, but it would give her something that did not have to be because of her injury.

“I think this van would be a nice thing separate and apart from anything medical,” she said.

Rita is accepting donations from the public to help her purchase a van, which could be converted into wheelchair accessible, and said she is grateful for any support of any kind.

How to help Rita:

Donations can be made to help Rita Avitia acquire a wheelchair accessible van at Wells Fargo bank in Sterling. The account number to reference is SUGS – 2985245832.