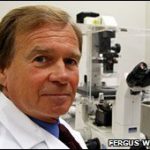 The president-elect has been a strong supporter of embryonic stem cell research.

He is widely expected to lift restrictions imposed by President Bush in August 2001 who was opposed to the destruction of embryos for scientific research.

This limited federal funding to stem cell lines created before that date.

It would simply take an executive order – not legislation – for President Obama to reverse the Bush restrictions.

Although the Obama transition team has not made specific promises on stem cells, the change is widely anticipated.

The current restrictions limit federal funding to around sixty stem cell lines created from embryos destroyed prior to August 2001.

But scientists say only twenty eligible cell lines remain useful for research and many of these are problematic.

The Bush restrictions led to some bizarre complications for scientists according to Professor David Schaffer, of the University of California, Berkeley.

Professor Schaffer, the co-director of the Berkeley Stem Cell Center, says the restrictions have slowed down their work.

His lab is working on basic research into Parkinson’s and Alzheimer’s, trying to create the cells which are lost in these diseases.

He cannot put a time-frame on when that might translate into treatments.

A policy change in the White House would receive broad support in California.

It has become the epicentre of stem cell research in the US.

To date the California Institute of Regenerative Medicine (CIRM) has given out more than $600m in state grants to universities.

CIRM has helped funded a separate building at Berkeley for research on newer stem cells lines, which is nearing completion, but in the future such separation of science may not be necessary.

The change in policy at the White House would also be welcomed by industry.

Geron, a biotech company based in “silicon valley” south of San Francisco, is set to take embryonic stem cells into the clinic.

It has spent $170m on developing a stem cell treatment for spinal cord injury.

“The impact of eight years under the previous administration for stem cell research has really been devastating.

Geron has submitted a 22,000 page submission to the Food and Drug Administration – the body which approves clinical trials in the US – the largest application on record.

Geron wants to inject embryonic stem cells direct into the spine of newly paralysed patients. In trials on rats, the animals regained some function.

For the moment the stem cells remain cryo-preserved in liquid nitrogen but they are ready to be shipped to the clinic if and when approval is given.

“This goes beyond what a pill or a scalpel can do”, says Dr Okarma. “Twenty or thirty years from now, hopefully I’ll be full of embryonic stem cell products that will keep me healthy into my 90s and beyond.”

Geron’s next application will be for a stem cell treatment for heart failure. It’s also working on treatments for diabetes, liver disease, bone and cartilage repair.

That may seem like science fiction to many, and private companies don’t usually talk down the promise of their products.

But it is far from being an isolated view in the industry. Dr Michael West is another leading figure in the field of stem cell research.

He used to be in charge at Geron and helped fund the research which led to first human embryonic stem cell line being created in 1998 and now heads another company, BioTime.

“For the first time we can see a way to rebuilding the human body and to adding new heart muscles and saving many millions of lives.

“These cells not only do that for the heart, for the kidney, but for everything in the human body.”

He believes embryonic stem cells could profoundly extend human lifespan as scientists work out how to reset the normal ageing process of DNA.

All this of course is just theory at the moment. Dr West’s experiments are in mice not men. Successful trials in a dish or a rat are one thing; success in humans is quite another.

What we know is that embryonic stem cells are special.

Of the bundle of cells found in a three day old embryo, each has the ability to turn into any of the body’s two hundred cell types.

Using embryos donated through IVF treatment scientists have coaxed the stem cells inside into many types of tissue. One embryo can provide a limitless supply because the cell lines can be grown indefinitely.

Geron says it has enough undifferentiated stem cells to potentially treat every spinal cord injured patient in the United States for the next two decades.

But embryonic stem cell research is controversial. President Bush said the destruction of embryos in scientific experiments as immoral. Many evangelical Christians are worried about where stem cell policy may be heading.

Dr Robert Evans is the founder of a new church, so new it holds its services in a school hall in Pleasanton California.

As pastor at Christ Church and a bio-ethicist, he is disturbed by the new freedoms scientists may be given.

“What it signals is that the human embryo has been denied moral standing and a corresponding right to life.

“As an evangelical who believes all life is created equal in the image of God, and that we have moral standing from the moment of conception, I would view that as a very chilling decision.”

Dr Evans points out that there are adult sources of stem cells such as bone marrow which avoid the moral issues.

“All therapeutics to date have been done with adult sources, so we can still help those in need without having to violate the standing of the human embryo.”

A seismic shift in White House policy on stem cells seems likely, but the state of the economy could still leave scientists frustrated that President Obama won’t back words with cash.