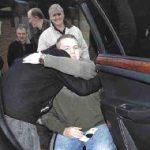 Ron Stewart asked a bunch of his friends to kick in $1,000 each to help buy a specially equipped car for Sean Corner, the 21-year-old rugby player paralyzed in a game in September.

And so it went.

In a few days, Stewart had $24,000 –enough to buy a tricked-out 2004 Chrysler Pacifica fitted with hand controls.

Stewart and the guys who play hockey Friday afternoons at the Morgan Firestone arena handed the keys to Sean yesterday.

“They’ve given me a lot of my life back,” Sean said after recovering from the shock.

“It was a complete surprise. I don’t know how they kept it secret.”

Local benefits have raised more money for Sean, who suffered a complete spinal cord injury in September during a Hamilton Hornets game against Port Colborne.

His father, Tom, has been playing pickup hockey with Stewart and the guys longer than either of them will admit.

Tom was “blown away” when he found out what the boys were up to.

“What can I say? I do not know what to say to guys like this. These guys are for real.”

Stewart said the idea grew among a bunch of busy “guys playing a kids’ game” who really wanted to help. But they didn’t have the time — or inspiration — for a fundraiser.

“So I started asking guys for money.”

Not all the donors play hockey. Stewart had one businessman hunt him down to contribute because he’d heard about the idea. He arranged the car through Domotor Enterprises in Brantford, which also sold Sean’s small car. The dealership took no commission on the sale and presented Sean with the full amount it sold for.

Mom Lorraine says she doubts Stewart and her husband’s pals realize what they’ve done for Sean.

“It’s not just a car,” she said quietly. “They’ve given him his independence, a big part of his life back.”

Now Sean can come and go at will. He has his licence, has taken the rehab driving course at Chedoke Hospital and is no longer dependent on friends to pick him up.