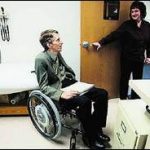 Life for James Rudolph of Howell changed in a flash when a motorcycle crash in 2003 injured his spinal cord.

Damage to the bundle of nerves that control his body movements left Rudolph, now 25, paralyzed — and stunned by the challenge of facing life in a wheelchair.

But he has a doctor with rare empathy. Dr. Edward Nieshoff has a spinal cord injury, too.

No one is better at showing the possibilities for people with spinal cord injuries than Nieshoff, a Farmington Hills resident. He’s both a prominent scientist and the father of twin baby boys.

Nominated in October for a national award, Nieshoff divides his efforts between seeking a cure and caring for patients like Rudolph. Last week, their wheelchairs were side by side in Novi, at the Rehabilitation Institute of Michigan clinic on 12 Mile, just east of Twelve Oaks Mall.

“I’m doing pretty well,” said Rudolph, explaining he hasn’t let his injury stop him from rebuilding a vintage Mustang. That hobby gets a nod from his sports car-loving doctor.

“He knows the Nieshoff System: a car, a job and then a girlfriend,” quipped the chuckling doctor, getting a grin from his patient.

Being with Nieshoff, 49, is by turns entertaining, informing and calming. He speaks in complete sentences. His movements are deliberate, as when he cradles a sandwich and eats his lunch slowly. He explains matter-of-factly, “I can use my arms, but my fingers are paralyzed.”

Beneath the calm, though, is a quiet urgency in this wiry fellow who rolled his wheelchair through medical school.

Nieshoff is hustling to find a breakthrough for paralyzing spinal cord injuries — just like his own.

He’s aware that cynics say his scientific ardor is selfish, that he’s driven to succeed by dreams of rising from his own wheelchair to walk. Those thoughts splinter the calm in this doctor, quadriplegic since a diving injury in his youth, and now a key scientist in the Detroit Medical Center.

His voice rises when he assails what he calls “the telethon mentality” of those who patronize disabled people.

“The stereotype calls for a lifetime of pity,” he says. He’d like the world to treat people with disabilities as having the same joys and frustrations as anyone.

Nieshoff makes a persuasive case that he’s not waiting for a cure to be happy. Married since 1999, in February he became the father of twins, named Edward Raja and Charles Bala.

“My wife is Indian, so they have Indian middle names,” he says. His wife, Aruna Nieshoff, is in a parallel career: She’s a Physical Therapist who specializes in neurological disabilities caused by strokes, spinal cord injuries or brain injuries. The two met when they worked together at the Rehabilitation Institute of Michigan, in the Detroit Medical Center.

At the institute’s clinic in Novi, Edward Nieshoff gives patients the same advice he says he gave himself, decades ago, when he battled Depression after his diving accident: “I tell young guys, ‘You’re going to get through this injury, and you’re going to want to live a good and satisfying life.’ ”

Nieshoff is a doctor of physical medicine and rehabilitation — also called a Physiatrist (pronounced fizz-ee-AT-trist). He does research from an office in Detroit, at the headquarters of the Rehabilitation Institute of Michigan on Mack at John R, at the south end of the sprawling complex that makes up the Detroit Medical Center.

His research plans include a zany surprise.

“Stem-cell research has dominated the headlines. But there’s a bunch of other promising approaches under the radar,” he says. They include trials of implanted electrical stimulators, as well as new drugs, along with fresh applications for existing drugs — including, as improbable as it sounds, Viagra, the drug widely advertised to help men in the bedroom.

Yes, Viagra has “distinct effects completely aside from enhancing erectile function,” he says, delicately and without a trace of his characteristic humor.

“I’ve got a little dab of money and agreements with some nationally renowned basic scientists” at Wayne State University, he says. Soon, they’ll collaborate in testing Viagra on rats with spinal cord injuries.

Nieshoff is ready for the wisecracks, a small price for potential gains on something as momentous as getting people out of wheelchairs and hospital beds. As anyone in medicine knows: When a breakthrough comes, those involved are sure to become legends.

He nearly became a legend in October. He was nominated for the National Spinal Cord Injury Association Hall of Fame. He would have joined such household names as Christopher Reeve, the actor who died in 2004 after a decade of paralysis following his fall from a horse.

Nieshoff didn’t make it, however — not this year. Nominees who aren’t chosen may be reconsidered in future years, say officials with the awarding association in Bethesda, Md.

But this man who rolls his wheelchair through Farmington Hills’ Heritage Park, while his wife jogs behind a stroller built for two, isn’t counting on the Hall of Fame. No more than he’s counting on finding a cure for spinal cord injuries.

“I should keep buying lottery tickets, too, right?” he quips.

He’s more interested in enjoying the here and now — and in helping others do the same.