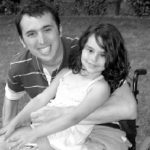 When Richard Travia hit the beach one night last summer he found himself face to face with a year he never could have imagined.

On Aug. 13, 2005, Travia, 25, of Freehold, headed down the shore to Manasquan to catch some waves with his friends. As Travia was body surfing, he got caught under a powerful wave that drove him headfirst to the bottom of the ocean floor. The impact of the wave broke Travia’s neck and he laid face down, motionless in the water.

Travia said when his head first hit the bottom of the ocean, he had not realized exactly what was happening. It was when he attempted to swim to the surface that he realized he was unable to move his arms and his legs.

“I just held my breath, hoping my friends would see me,” he said.

Travia said that after his friends brought him to shore, he was laying on the beach for about 45 minutes before he was taken away in the ambulance. Travia, suffering from a spinal cord injury, was brought to the trauma unit at Jersey Shore University Medical Center, Neptune.

According to his Internet Web site, richardtravia.org, within six hours of the accident Travia had his first operation in order to stabilize his spine.

“At this point I was just trying to breathe. I wasn’t concerned with not being able to move my arms and my legs,” he said.

Two days later Travia underwent his second operation, which inserted a metal cage in his spinal cord to replace his C5 Vertebrae that had shattered during the accident. The metal cage was inserted to support his C4 and C6 vertebrae, according to the Web site.

Travia said when the surgeries were completed and he was able to breathe, then it was time to work hard and get better. He said he never dwelt on the fact that he was a quadriplegic and always believed he would get better.

On Aug. 19 – six days after the accident – Travia was admitted to the Kessler Rehabilitation Institute, West Orange. One week after his arrival at Kessler, Travia was rushed to St. Barnabas Medical Center, Livingston, because his oxygen level and pulse rate were dangerously low. Travia battled serious respiratory problems including a collapsed right lung.

The following week Travia was readmitted to Kessler where he spent the next five months receiving physical and Occupational Therapy.

“It was a long time. I got used to [being at the hospital] toward the end but I was very much looking forward to coming home. Five months in a hospital is a long time,” Travia said about his stay at Kessler.

He said the hardest part about the recovery process is waking up every day and knowing how hard he has to work to get better. Even a year after the accident, Travia said, this part of the process is still an adjustment.

In January, Travia returned to Freehold to live with his parents, Paul Jr. and Linda Travia. He is currently receiving outpatient therapy at Health South, Tinton Falls.

Travia said he is now doing a lot of things on his own and has little help getting around. A big milestone for Travia was getting in bed on his own, which he said used to take him two hours but now only takes 30 minutes.

“Everything takes time, that’s what I’ve found,” he said.

Travia said his upper body is getting a lot stronger because his biceps and shoulders do all the work for the rest of his body. However, Travia said in recent weeks he has felt some movement in a few of his toes on his right foot and movement in his left hamstring and butt muscle.

“It’s kind of exciting that things are starting to wake up a little bit,” he said.

Looking back on the last year, Travia said it was definitely not how he had planned to spend it. However, he said he is ahead of schedule in his recovery and he is looking forward to putting the accident behind him.

“One year later I am alive, I am strong. I am motivated. I have a fire burning in my heart … to fully recover,” he said on his Web site.

Travia said he is thankful for all the support he has received from his friends, parents, siblings Scott, Keith, Ryan, Chris and Suzanne, and his girlfriend of six years, Katie Pizzi.

“It’s been a wonderful experience seeing the support they’ve given me,” Travia said. “It helps me get through the day knowing that a lot of people are praying for me and thinking about me. It makes it a little bit easier.”

According to the Web site, the Travias have set up two funds that will help the family pay for Richard’s medical expenses.

The National Transplant Assistant Fund (NTAF) Mid-Atlantic Spinal Cord Injury Fund is a nonprofit charitable organization that establishes personal funds for individuals who have a spinal cord injury. Contributions are earmarked for Travia’s exclusive use and are available to pay for uninsured medical expenses and to assist with his recovery, according to the Web site. A trust fund has also been set up to help pay for Travia’s medical needs.

Another way to contribute to the family is to participate in the Richard Travia Recovery 5K to be held Sept. 16 at Turkey Swamp Park, Georgia Road, Freehold, at 9:30 a.m. The walk/run will be presented by Freehold Area Running Club and the NTAF Mid-Atlantic Spinal Cord Injury Fund. For more information about the fundraiser visit richardtravia.org.

In regard to all the donations and contributions people have made, Travia said it is unbelievable how generous everyone has been.

“One year later I am inspired by my family, by Katie and by all of my friends who have gone out of their way to send words and thoughts of encouragement my way. I never said I could do this alone and (they) have never allowed me to,” he said on the Web site.