It was a summer day at Pensacola Beach spent with family and friends.

Cory Jackson dashed across the sand, dived head-first into the Gulf of Mexico and hit his head on a sand bar.

When he resurfaced, he couldn’t move. Three Vertebrae were broken. His spinal cord was bruised. He couldn’t move from the chest down.

From that day forward — Cory would be paralyzed.

Fourteen months later, Pensacola Fire Department Capt. Terry Jackson and his wife, Patty, are thankful to have their son, now 19, at their Cottage Hill home, north of Cantonment.

Terry Jackson, a firefighter for 21 years, said it’s been a tough year. But the generosity of his co-workers — especially members of Pensacola Fire Department Local 707 — as well as other volunteers and friends has helped more than he can express.

The biggest gift: The volunteers more than doubled the size of the Jackson family’s home. It’s now totally accessible to Cory, who uses a wheelchair, has only limited use of his arms and has very little use of his fingers.

“It has just been unreal the way people have come together to help us, even folks and businesses we didn’t really know. It just seemed that when we needed something, the telephone would ring and it would be taken care of,” Terry said.

After the accident, Cory, accompanied by his mother, spent 2½ months at the Shepherd Center, a Rehabilitation facility in Atlanta.

Jackson could not imagine how Cory would function once he returned home.

“When he first came back on Sept. 23, 2005, we used the living room as his bedroom. But there really wasn’t much room for him to use a wheelchair,” Terry said. “Our plan was to enclose a small patio to make more room, but that all changed after my union brothers got involved.”

The volunteer co-workers undertook a major renovation that increased the size of the Jackson home from 1,200 square feet to 2,500.

“These guys certainly put plenty of sweat equity into improving our home and lives,” Terry said.

The new construction framing was completed in just one day, thanks to the help of 30 firefighters, he said.

Interim Fire Chief Mel Waters said the project “just seemed like the right thing to do.” 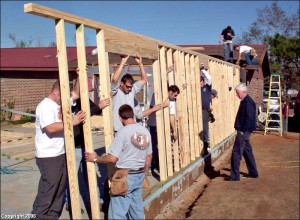 “Terry Jackson is a second-generation firefighter,” Water said. “Firefighters’ job is to help people. When one of our own is in distress, we like to step up and help them.”

Cory’s spacious new bedroom includes a large bathroom with a roll-in shower that has plenty of room for his wheelchair.

“I knew it would be first-class, whatever they decided to do,” Terry said.

Cory moved into his new bedroom and bath in May. Just being able to take a shower, after many months of mere sponge baths, was a real treat for his son, Terry said.

“Let me tell you — he used all 65 gallons of hot water in that new tank with his first shower,” he said.

Although things will never be exactly the same, life is returning to somewhat of a routine for the Jackson family.

Cory is not yet ready to talk publicly about his injury, his father said. But the young man and fiancee Kim Lizardi are looking forward, attending Pensacola Junior College and hoping to launch a joint career, perhaps in business.

“Since Cory likes animals so well — he already has a lizard, turtle and rabbits — I think maybe they could open a pet store,” Patty Jackson said. “The main thing is that we never give up hope and that he keeps moving forward in life.”