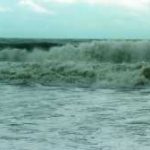 DOWNSTATE — Two summers ago, Josh Basile was standing in the ocean at Bethany Beach when a wave sent him flying head first into the hard, wet sand below.

He didn’t walk away with a bump, bruise or concussion.

In fact, he didn’t walk away at all.

“My head was down in the water and I couldn’t do anything but hold my breath and wait for my friends to get me,” he said. “I thought I was going to die.”

Mr. Basile survived, but was paralyzed from his shoulders down.

Although he’s regained some movement since the accident, he is still confined to a wheelchair and needs assistance with everyday activities.

The former college tennis player, now 20, has made it his mission to educate others about the dangers of the ocean.

Two weeks ago, he visited Dewey Beach to share his story with lifeguards and a Maryland scout troop, as part of an annual beach safety program.

It was the Potomac, Md., resident’s first trip to the Delaware beaches since his devastating injury.

“Coming back with a purpose was really nice,” he said.

“I have a great admiration and respect for his cause,” he said. “This is my 28th year in the industry, and I know dozens of people who’ve broken their necks, so his cause is just.”

Mr. Fritchman said there have been between nine and 12 apparent spinal cord injuries at Dewey Beach this summer.

Because of patient confidentiality, he does not know the final diagnoses.

But he knows that the mid-Atlantic beaches, particularly Delaware and Maryland, have a higher frequency of cervical spine injuries than other shorelines around the world.

“It has to do with our population. The Delaware beaches become extremely populated,” he said.

“Also, there is a profound shore break. The waves break onto the wet sand instead of the underlying water. There’s nothing to endure the energy of the wave except your body smashing onto the wet sand, which has the consistency of concrete.”

And, as Mr. Basile knows, you don’t need to do anything particularly risky to become the ocean’s next victim.

He wasn’t diving or roughhousing when he got hurt.

He was simply standing in the water, watching his friends toss a football on the beach.

He had turned his back to the waves and was caught off guard when one picked him up and slammed him down in one crushing blow.

“Think of it like you’re doing a handstand and someone drops you down on your head — my whole body weight went right to the top of my head,” he said.

Mr. Basile thought his injury was an unfortunate fluke, until he went to the University of Maryland Shock Trauma Unit and met two other people who sustained spinal cord injuries on the Delaware shoreline the same weekend he did.

“That’s when I realized this wasn’t a freak accident,” he said.

“They think about the fun they’re having,” he said.

He said beachgoers should check with a lifeguard before entering the ocean to get an update on the conditions.

If the waves are particularly rough, people should be extra cautious or just stay out of the water.

Mr. Buckson also advises people to never stand in the “impact zone” where the waves crash directly onto them and to never turn their back to the waves.

When a wave is approaching, it’s best to dive under it, he said, but not so low that you risk hitting your head on the sand.

Riding waves is another risk, he said, but it remains a popular beach activity.

“Once you get up on a wave, you’re going to go where it wants you to go, unless you know what you’re doing and how to get yourself out of it,” he said. “If you ride waves carelessly you could get hurt.”

Dewey Beach lifeguard Peter Hartsock said bodysurfing can be an especially hazardous activity — he’s been a lifeguard for 37 years and is well aware of the dangers.

“I’m not going to tell anybody else not to bodysurf, but as far as me, I stopped during my first year of lifeguarding,” he said. “Sure it’s fun, but you have nothing between you and the bottom (of the ocean).

“I saw so many people get hurt bodysurfing. You don’t know where you’re going to hit, and you’re going head first. It’s like diving off a pier when you can’t see the bottom.”

Conditions have gotten even more hazardous in Dewey and Rehoboth beaches since a beach replenishment project was completed.

“When people ride the waves in, it’s a little more dangerous, due to the slope that’s been created,” he said. “Before, you had a gradual slope, where you could walk 20 to 30 yards before going under water. After the replenishment, there is a step-off, where as soon as you walk in you’re under water. It made the impact zone more dangerous.”

The waves now break into hard, wet sand, and someone who hits head-first is susceptible to spinal cord injuries.

In Dewey Beach, the number of spinal cord injuries didn’t go up after the replenishment, but Mr. Fritchman agreed with Mr. Buckson that the replenishment created a shore break that is more conducive to such injuries.

Bethany Beach is scheduled to undergo a replenishment next year, and lifeguard Christian Sears said visitors should expect a more hazardous shore break.

This year there have been about 15 head, neck and back injuries in Bethany Beach — none resulting in paralysis — but Mr. Sears worries that more serious injuries could occur after the replenishment.

“It’s something we’ve seen before, and it’s a concern,” he said. “It’s one of those circumstances where people should definitely ask a lifeguard before going in the water what the conditions are.”

Replenishment is not needed in Lewes, town police sergeant Bruce Ritter said, because the waves are not as powerful as those seen at Bethany, Dewey and Rehoboth beaches, so there is less erosion.

Lewes Police chief Ronald Gooch said there haven’t been any spinal cord injuries in Lewes in the past two summers.

The lifeguards report all major injuries to him.

While some beaches present greater risks than others, Mr. Hartsock said people need to realize that spinal injuries can occur on any shoreline.

“This stuff happens far more than the public thinks,” he said.

Tom Gill, a spokesman with the U.S. Lifeguard Association, said the agency does not keep statistics on how many spinal cord injuries occur on U.S. beaches, but he referred to it as a “very prevalent” problem.

“It’s probably among the most common and serious medical emergencies lifeguards run into each year,” he said.

Mr. Basile said he worries that the risk of spinal cord injuries is being kept under wraps so that tourism won’t be negatively affected.

“There’s no doubt in my mind that beaches are hiding this because of economics,” he said.

Capt. Fritchman disagreed, and said he wants beachgoers to understand the risks and take the necessary precautions to protect themselves.

“We don’t hide information at any time,” he said. “It’s a user beware thing. It’s the Atlantic Ocean and people need to take some responsibility.”

Post your opinions in the Public Issue Forum at newszap.com.