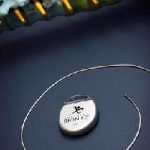 ‘Like a buzzing’: 250 Utahns have taken advantage of the implanted stimulator

Joshua Taylor spent half of his senior year in high school restricted to his bed or the couch, missing out on socializing, classes and competitive swimming.

A back injury from a hiking trip caused him so much pain it hurt even to walk. “It was sad for me, because my son’s biggest social interaction was me when I came home from work,” said his mother, Dee Ann Taylor, who is a nurse.

When medications and other treatments did not alleviate Joshua’s pain, physician Stephen Lordon of the Summit Pain Management clinic in Murray decided he should try an implanted spinal cord stimulator – with dramatic results.

This past winter, two months after Joshua got the device, he participated in state swimming regionals with his Brighton High School teammates. The device “just totally turned things around for me physically and mood-wise,” Joshua.

Spinal cord stimulation has been in use for about 40 years, although researchers say more study of who benefits most from the technology is needed.

The stimulator sends tiny electrical impulses to nerves from an implantable generator, through wires placed on top of the spinal cord. The impulses mask the pain signals traveling to the brain, but no one knows exactly why. The device is used mostly for people with back, leg and chest pain.

“It’s like a pacemaker but with different functions,” Lordon said. “Rather than controlling heart rhythm, it controls nerve pain.”

Lordon implants Precision Spinal Cord Stimulation Systems, by manufacturer Advanced Biotics, citing its small size, rechargeable battery and computer programming. The Advanced Biotics’ implant was approved by the U.S. Food and Drug Administrationin April 2004, and since March 2005, doctors have implanted more than 5,000 devices in the U.S. and 250 in Utah.

Barbara Webb, 74, of Sandy, also was impressed by the device, which she had implanted by Lordon on Aug. 25.

“You can’t imagine the difference,” she said. “For the last several years I’ve had arthritis and Osteoporosis. I couldn’t bend and was using a walker.”

Wary of surgery, Webb concluded that the stimulator was her only option. Living with her daughter, Webb rarely left the house and ate and napped in her recliner.

Within less than a week, she drove her van and went out to eat at a restaurant. She plans to start walking again, with the goal of working up to a mile a day, and she has cut back drastically on her pain pills.

In a 2004 study, researchers at the University of Washington examined how effective stimulators are for patients with certain types of back pain and how often complications happen. They concluded the pain relief from the devices is mild to moderate, and can decrease over time.

While life-threatening complications were rare, others – such as infection – occurred in an average of one-third of patients. An earlier study in France of 77 patients who received stimulators between 1984 and 1992 found the devices were effective for carefully selected patients.

The procedures and device cost roughly $50,000 and are covered by Medicare and most insurance companies.

While operating, the generator gives off a vibrating or tingling sensation.

“At first it startled me, but I got used to it,” said Joshua. “It’s like a buzzing where my pain used to be. It’s not uncomfortable.”

Joshua is focusing on regaining his muscle strength and wants to quit using painkillers by the end of the year, when he hopes to go on a mission for The Church of Jesus Christ of Latter-day Saints.
“I would not mind having this the rest of my life,” he said.

* First, the effectiveness of the device for the patient is tested. A wire, called a lead, is inserted through an incision near the spinal cord. A doctor uses a computer to move the signal as the patient says whether pain is better or worse. A trial placement usually lasts five to 14 days.

* If the device works well, patients undergo surgery to have the pulse generator and the leads implanted. The generator usually is inserted in the hip or buttocks areas.

* Once home, patients can control the electric flow with a remote control. The device, which can be removed, must be charged about once a month.

I May Have Suffered A Spinal Injury, But The Ball Is...