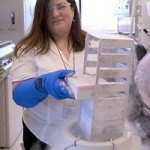 Here’s a reality check amid Congress’ showdown with President Bush over stem-cell research: The potential treatments for diabetes, spinal-cord injury and other devastating disorders are years away from being tested in people.

How fast scientists can do key experiments to prove whether embryonic stem-cell research will live up to its promise depends on how much money the federal government contributes, the key question as the Senate opened debate Monday on legislation to loosen Bush’s restrictions.

The question boils down to exactly which embryonic stem cells are used in the race to develop treatments: A limited number of ones created before 2001, many in ways that make human use problematic if not impossible — or potentially thousands of newer stem cells, culled from fertility-clinic leftovers otherwise destined to be thrown away. Many scientists insist these would be better suited for implantation into sick Americans.

Embryonic stem cells are essentially master cells, able to morph into all the cell types found in the body. If scientists could learn to control those cells and coax them into becoming specific types on demand, they potentially could grow replacements for damaged tissue — new insulin-producing cells for type 1 diabetics or new nerve connections to restore movement after spinal injury, for example.

The controversy: Scientists take those cells from a 5-day-old embryo, when it’s a ball of about 100 cells barely visible without a microscope — but the culling kills the embryo.

Bush likened that to abortion when on Aug. 9, 2001, he restricted government funding to research using only the embryonic stem-cell “lines” then in existence, groups of stem cells kept alive and propagating in lab dishes.

The new legislation, poised to pass the Senate but facing a veto by Bush, wouldn’t fund the creation of new stem-cell lines — and hence any embryo destruction — but would let the National Institutes of Health (NIH) fund research using newer stem cells in the pursuit of treatments.

Five states aren’t waiting for a break in the federal stalemate but are funding embryonic stem-cell research themselves: California voters approved a $3 billion initiative now being fought in court; Connecticut has a 10-year, $100 million initiative; Illinois spent $10 million last year; Maryland has approved a $15 million budget; and New Jersey has spent about $25 million in two years.

Scientists are avidly studying adult stem cells, too, with roughly $200 million in financial aid from the NIH this year, far more than for embryonic stem cells.

But despite 50 years of research so far, adult stem cells’ main use today is through bone-marrow transplants to counteract intense cancer chemotherapy or to treat only a handful of other disorders, researchers wrote in the journal Science last week.

“The politicians kind of set us up against each other but … the scientists are not arguing about this. We are working together,” University of Minnesota stem-cell researcher Meri Firpo said in an interview. She has worked with all types, and created two of the Bush-approved embryonic stem-cell lines and 11 newer lines with private money.

Added Dr. Harold Varmus, a Nobel laureate and former NIH director: “I do believe in the very long run it will be possible to learn enough about how cells change their behavior to take perhaps any kind of cell and make it do anything.”

But that’s harder to do and could take far longer, while the first embryonic stem-cell studies in people might begin within five years, he added.

So what are the biggest hurdles for embryonic stem cells? They involve both science and paperwork, and Minnesota’s Firpo embodies both:

• In her quest to develop insulin-producing cells to treat diabetes, she runs one lab for her NIH-funded research and a separate lab for research funded by her university and private groups, even though both labs do the same studies. Because private grants are smaller than NIH’s multiyear grants, her privately funded experiments go into the freezer when that money runs out and she has to raise more.

• Firpo created her newer stem cells in ways safer for transplantation. When she created her two Bush-approved batches, “we never thought these cell lines would be used clinically,” she explained, describing how basic researchers don’t follow the Food and Drug Administration’s rules for actual therapies.

• Scientifically, researchers are reporting great strides in getting embryonic stem cells to form the tissues they want. The question is whether they’ll continue to work properly when implanted into the body, a big safety question.

“They need to stay in the right place, stay alive and need to function correctly. Those are the parts we’re just beginning with,” Firpo says. “It’s hard to predict what timeline that’s going to take.”

By LAURAN NEERGAARD
The Associated Press