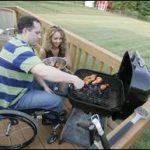 A former Fort Campbell soldier who was deployed to Iraq in 2003 and 2004, Greg Minow is now a man on a different mission. Legs 4 Greg, his Web site, details the 28-year-old’s quest to have an operation that may one day help him walk again.

On Nov. 6, 2004, Greg had a dirt bike accident that damaged his spinal cord, making him a T7 complete Paraplegic. He and his wife, Alicia, 28, are determined to raise the $66,000 it will cost for Greg to have spinal cord decompression surgery and stem cell injection therapy. They are moving next month to California to be closer to the International Spinal Cord Regeneration Center in Tijuana, Mexico.

Injured people can qualify for the surgery if their spinal cord has not been completely severed and the dura sac surrounding the spinal cord is intact, allowing for flow of spinal fluid along the full length of the spinal cord. Greg meets both criteria, with approximately 30 percent of his neural fibers intact across the span of his spinal injury.

“When these two essential conditions are met, the healing program offered by the ISCRC is the most successful in the world today,” says the center’s Web site.
About the surgery

The surgery remodels the spinal canal, then uses injections of umbilical stem cells from the umbilical cords of babies to facilitate spinal regeneration.

“I found out about it through my oldest sister, who is an R.N.,” Greg says.

His sister, Shelley Zastoupil, was working on a term paper and noticed a reference to the International Spinal Cord Regeneration Center in a friend’s paper. Greg has since flown to Tijuana for extensive evaluation and found he is a good candidate for the surgery.

“The results are very encouraging,” says the ISCRC Web site. “A number of our paraplegic patients are now walking. The quadriplegic patients treated to date are each making substantial progress. Patients in earlier stages of recovery are regaining sensation and control of bodily function.”

Greg says even if the surgery doesn’t allow him to walk again, he hopes to regain feeling in his torso.

“For him to get the smallest amount of function back, even to his bladder, would make a huge difference in his daily life,” Alicia says.

“Being in a wheelchair isn’t bad,” Greg says. “It’s the bowel and bladder that’s bad.”

Greg has to catheterize himself every three to four hours, and must wake up at 2 a.m. daily for as much as two hours of bowel care, using laxatives and stimulation to encourage elimination.

Regaining feeling in his lower torso could restore Greg to normal bowel and bladder function.
The price tag

After his surgery, Greg will have four hours per day of Rehabilitation and repeated injections, at $8,000 each, of umbilical stem cells.

“I love working out, the physical, the rehab. I can handle the pain,” Greg says. “The only obstacle facing us is the money.”

Although he is leaving for California in a few weeks and hopes to have the surgery this fall, he cannot schedule it until he has half of the $66,000 as a down payment. He is trying to raise money through his Web site, as well as through sales of lollipops and chocolate bars at local Express Tan stores. Donations to date total $4,700.58.

When it was pointed out to him that if every person in Montgomery County donated 50 cents, his surgery would be paid for, a huge smile overtook Greg’s face.