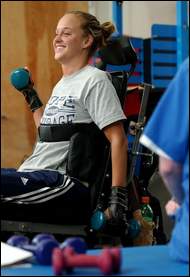 Tara Blackwell has prepared herself the past 12 months for the next six weeks.

All the Physical Therapy. The dedicated effort. The emotional highs and lows.

Her mission to walk again has reached a new phase. Blackwell, 21, a Pine Forest High School alumnus who suffered a paralyzing injury April 9, 2005, while a Troy University softball player, begins accelerated Rehabilitation Monday at the Kennedy Krieger Institute in Baltimore.

“I feel like it’s the next step,” said Blackwell, who left with her parents Saturday for the two-day drive to Baltimore. “I feel like every day is my next step to my recovery.

“All along, I felt like I’ve been taking baby steps. This is the next big step.”

It’s an important one for Blackwell, who is determined to leave her current life and regain her past. She lives to walk. To dance. To wade in the Gulf of Mexico again.

At the International Center for Spinal Cord Injury, connected with the Kennedy Krieger Institute, Blackwell will be examined by Dr. John McDonald.

He was Christopher Reeve’s doctor after the late-actor’s paralyzing injury from an equestrian accident in 1995.

McDonald is leading a quest to develop a procedure with stem cells that he hopes will regenerate the spinal cord. Doctors have found success on rodents. Clinical trials are planned with primates.

But it might take two years before the procedure is ready to be tried on a human. It might involve leaving the United States because of legislation banning usage of embryonic stem cells.

Either way, Blackwell is ready.

“(The doctors) already told me I was a candidate, but I would like to be a top candidate,” she said. “I would like for them to see how hard I’ve been working and how much this means to me.”

Her determination has been evident the past two months at Baptist Medical Park.

With the aid of Kevin Panter — a nurse who cares for her during the week — Blackwell traveled to the facility five days a week, working two hours a day with therapists and other medical personnel to rehabilitate muscles and regain movement.

“It’s been wonderful. It’s a great facility,” Blackwell said as she awaited her therapy session Thursday. “I feel like I’ve made a lot of progress. It’s not necessarily visible progress, but I know when I pick things up or I raise my hands above my head, I’m tons stronger than I used to be.

Her workouts at Baptist Medical Park followed efforts at Troy University, where she was assisted by the athletic training staff during the spring semester.

She would have been a senior second baseman next season but instead will earn her degree via correspondence.

Blackwell became paralyzed while performing an assisted backflip with a member of the coaching staff. Blackwell always had done the move to provide levity during practices. It occurred while in uniform as the Trojans prepared for a next-day doubleheader against Belmont College in Nashville, Tenn.

The flip was misjudged, and Blackwell landed on her head on the grass field. She suffered fractures of the fifth and sixth Cervical Vertebrae. Her injury is similar to that of Rusty Begnaud, the Pensacola Pelicans pitcher who was partially paralyzed in a swimming pool accident last month.

Blackwell has made significant strides in her effort to walk again. She has strengthened her neck, worked with her arms, ridden a self-propelled stationary bicycle and performed a variety of weight-lifting exercises. At Baptist Medical Park, she was able to perform a military press, lifting the bar above her head with the aid of a trainer.

“Her legs, her hamstrings, her calves are getting more developed,” her mother, Patsy, said. “Her spirits have been very good.

“Tara is so determined. She will ride that bike every chance she gets. Even if it’s midnight, she’ll ask me to put her on that bike. It’s been very encouraging to see.”

In Baltimore, Blackwell will be in daily therapy sessions for two or three hours, and then, “I guess I’ll see what there is to do in Baltimore,” she said.

When she returns to Pensacola in August, the next phase might be a trip to Carlsbad, Calif., to visit Project Walk, advertised as the largest exercise-based, spinal-cord recovery facility in the world.

“I know I can’t stay in Pensacola because there isn’t a place that specializes in spinal cord injuries,” Blackwell said. “But this is a great place to come back and forth to.”

One day, she plans on coming back without a wheelchair.